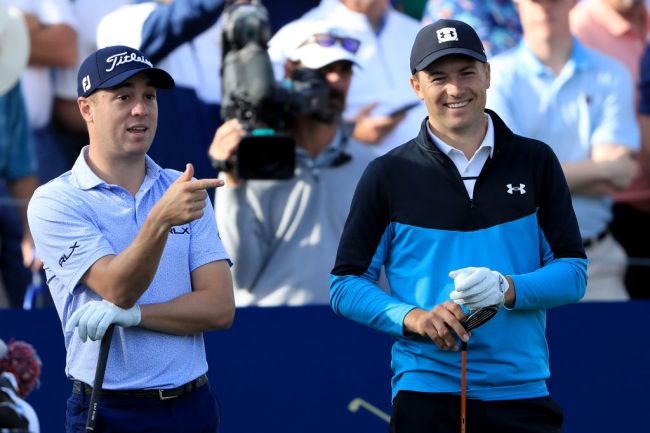 Jordan Spieth is playing good golf and putting himself in contention on the PGA Tour again, which is great for the game, and his buddy Justin Thomas is excited to see his name back toward the top of leaderboards.

It’s been almost four years since we’ve seen Spieth find the winner’s circle – his last win was the 2017 Open –  but he’s put together a stretch of play recently that has golf fans buzzing. After having just three Top 10’s in 17 starts during the 2020 season, Spieth has reeled off three Top 5 finishes in three of his last four starts.

During his Tuesday presser ahead of The Players, Thomas was asked what it’s been like seeing Spieth back in contention. JT explained that Spieth is simply back to being himself and that he’s gotten his confidence back.

“I knew that he would start playing better again, and I know he’s going to win again and contend in majors and probably win majors. Like he’s too much of a gamer,” Thomas explained.

“But for me, just watching him, he’s doing the Jordan Spieth stuff again. He’s making hole-in-ones, he’s holing out bunker shots, he’s making long putts, and that stuff — he’s got that walk, he’s got that swagger to his step and that confidence, and confidence is such a huge thing that you can’t just turn a switch on and say, I’m confident now. It’s all the work that he’s put in, all the — he’s practiced so much and put — just created those reps to where he’s able to hit the shots that he wants to do and do it enough to where he’s built that confidence back, and now that he has it, he trusts it on the golf course, and it’s just kind of spreading throughout his game.”

Thomas also explained that Spieth playing well will likely push him to play better as well. Thomas finished third at the Sentry Tournament of Champions at the start of 2021 and has picked up two other Top 15’s in his three other starts this year.

This week will be a huge test for Spieth as he has not performed well at TPC Sawgrass over the years. He finished T-4 in his debut at The Players in 2014 but has missed the cut four of the past five times he’s teed it up in the event.