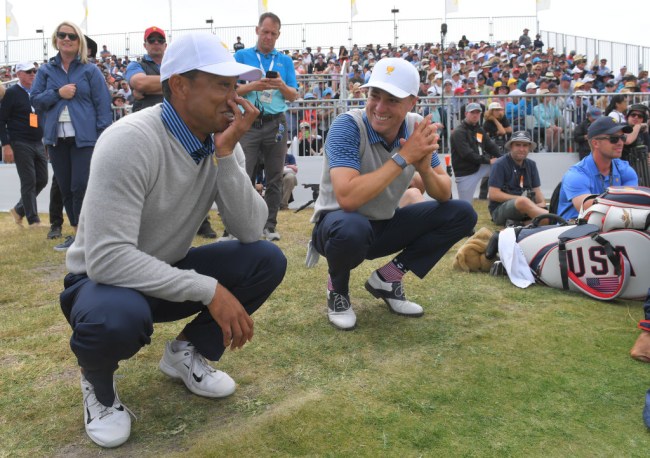 The one and only positive with the golf world being shut down at the moment is that we get to hear some behind the scenes stories from some of the game’s best. Last weekend we had both Phil Mickelson and Tiger Woods join CBS’ rebroadcast of past Masters giving us some inside information and now we’re instore for a new special about Woods called ‘Tiger Tales.’

It will be a one-hour program featuring a series of “light-hearted stories hope to shed a new light on the player who has dominated PGA Tour telecasts for the past two decades,” according to the PGA Tour.

The Tour sent out a teaser of the special featuring a story from Justin Thomas and if this is just a preview of what is to come in the series we’re in for some seriously high-quality stuff.

The story starts off with JT, Woods and his son Charlie enjoying a casual dinner at Tiger’s place, but then things livened up a bit when Charlie decided he wanted to play their version of home run derby in the living room. Unfortunately, Thomas caught a ball off the end of the bat and did some damage.

The story of the home run derby inside the Woods household with @JustinThomas34, @TigerWoods and Charlie. 😂 pic.twitter.com/tYz485N9bO

Luckily, Thomas only broke a candle. “They were like, ‘that’s fine, it happens all the time,'” Thomas says. “I’m like, ‘I still don’t feel good about it, but I’m glad it happens often.’ As long as it didn’t hit any of the major trophies, that’s fine.”

Playing golf with Woods is one thing, but playing home run derby inside Tiger’s living room, that sounds pretty fun too.