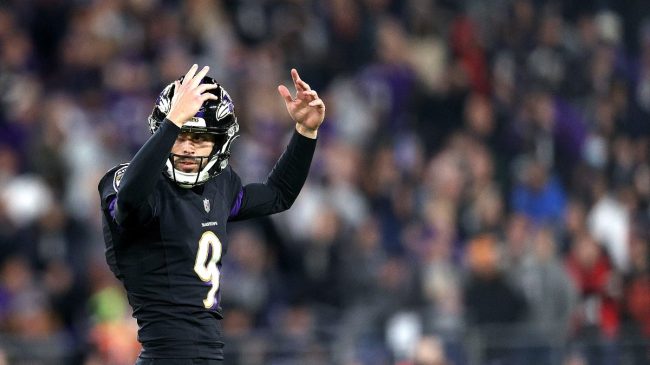 There is no questioning Justin Tucker’s greatness. He’s been lights out throughout his career and is a likely Hall of Fame candidate as soon as he’s eligible. However, some have pondered what makes the Baltimore Ravens kicker so consistent. Especially considering he’s been in the NFL since 2012. Now, we finally have learned the answer.

Justin Tucker Is A Chameleon And Keeps Changing His Technique

According to an article written by the New York Times, Tucker has changed his kicking technique multiple times throughout his career. It’s similar to how NBA players change their style of play as they get older. However, Mina Kimes shares a snippet from the New York Times article that proves just how great the Ravens kicker truly is.

Loved this @NYTmag profile of Justin Tucker—which describes how, despite being wildly successful, he’s changed his technique multiple times throughout his career, borrowing from others and rebuilding on the fly. A lesson for us all! https://t.co/ezney6Njks pic.twitter.com/WJZXjyiGil

The guy was just messing around in practice and found out he can kick it even further by imitating Stephen Gostowski. Who does that? The kicker GOAT, Justin Tucker. That’s who! This is what makes him the best at his position in NFL history. Not only is he accurate beyond belief, but Tucker has increased his leg power through the years as well.

He holds numerous records and doesn’t look like he’s dropping off anytime soon. The Ravens have been largely successful through the years and Justin Tucker has played a huge role. Without him, Baltimore wouldn’t feel as comfortable lining up for kicks 50+ yards out.

We’ll see how the rest of his career pans out. Perhaps we’ll see Justin Tucker change his technique a few more times before calling it a career. Maybe Ravens fans should start calling him the Human Chameleon or something.