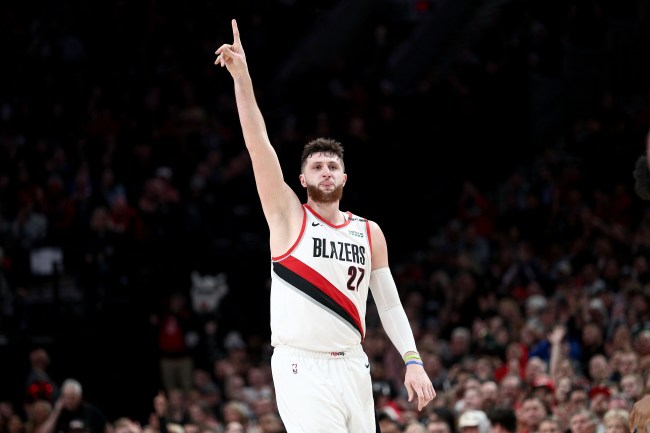 Jusuf Nurkic of the Portland Trail Blazers recently went down with a nasty leg injury that will cost him the rest of this season. It was so bad that it had the entire NBA community sending well wishes and prayers, because the injury was one that gets your stomachs in knots after seeing how his leg bent in ways that it shouldn’t be bending.

While Jusuf Nurkic’s road to recovery is a long one that all NBA fans should hope ends with him returning to form sometime next season, there’s still a very good reason as to why he should be paying attention to what his teammates on the floor are doing. That’s because, according to the front office insider of ESPN Bobby Marks, the 27-year-old big man has a chance to earn an additional $1.25 million should the Blazers hit the 50-win mark, which is an incentive Nurkic has written in his contract.

Here is what’s at stake tonight in Portland: pic.twitter.com/WzIp7dfdgb

As Marks references in his tweet, the that four-year, $48 million contract that the Blazers and Jusuf Nurkic negotiated added team success into it, and the $1.25 million for 50 team wins was something that was probably just tossed in there as a throw-in incentive that, according to Marks, was deemed unlikely prior to the season. But with the Blazers overachieving and fighting for a top-3 spot in the difficult Western Conference, Nurkic has a real chance to walk away with the added bonus — even if he’s not currently on the court to help his team reach the half-century mark in wins. Kudos to Big Nurk’s agent for writing this incentive into his deal.

With the Portland Trail Blazers currently favored to beat the Memphis Grizzlies tonight, there’s a really good chance that Jusuf Nurkic will be celebrating an extra $1.25 million being added to his bank account. Sure, it’s bittersweet because he’s injured and can’t help his team compete for a championship, but there’s got to be some solace knowing his teammates are still playing hard even though they’re without a key member of their squad heading into the NBA Playoffs this year.