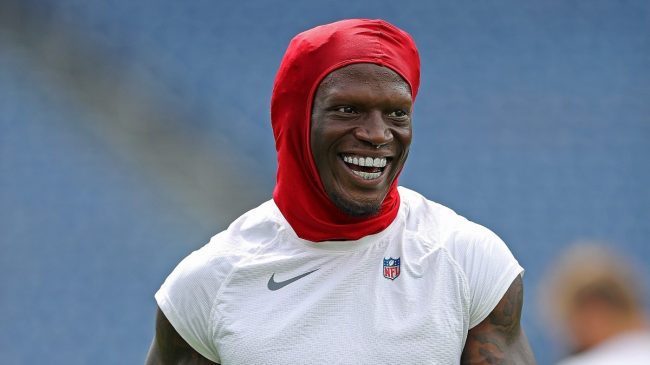 The Kansas City Chiefs made a big move on Thursday after trading for Kadarius Toney. Considering he hasn’t played a large role with the New York Giants so far, it makes sense why the new regime in New York moved on from him. However, it sounds like Toney is letting the fanbase know how he feels on his way out to Kansas City.

It’s not entirely clear what “joke” Toney is talking about here. However, it’s obvious he’s slamming Giants fans in this tweet. The former first-round pick may have just admitted he had been faking an injury all along. As you could imagine, it’s rubbing some folks the wrong way.

Even so, Kadarius Toney ends the tweet with “Irrelevant people don’t get updates.” Apparently, he views Giants fans, and maybe even the organization as irrelevant. Which is kind of bold to say considering the team is 6-1 without him.

That Joke Would’ve Been Funny If I Was Actually Hurt Still Lol…..Irrelevant people don’t get updates 🤣🤷🏽‍♂️

Regardless, Toney is on his way to play in Kansas City alongside Patrick Mahomes and Travis Kelce. As if the Chiefs needed another weapon on that offense. Even so, Kadarius Toney just didn’t pan out with the Giants. Enter Brian Daboll and the new regime that didn’t draft him and the trade makes total sense.

We’ll see how it plays out for Kadarius Toney. At least he seems happy to be with Kansas City. Additionally, after he threw major shade at his previous team, Giants fans are happy to see him leave too.