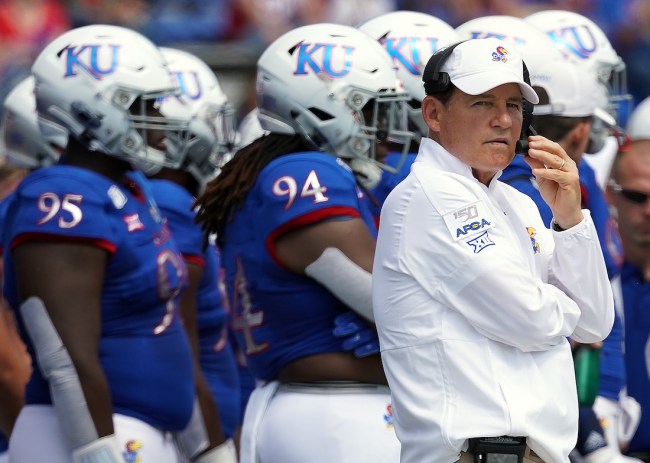 The Kansas football team has undergone some serious changes in the past six months or so, with the team mutually agreeing to part ways with head coach Les Miles over allegations stemming from his time at LSU years ago. Although the Miles allegations didn’t happen in Lawrence, it was still a black eye on the school and football program.

Months after trying to put out the fire regarding Miles, there’s a new incident that’s making news related to the Kansas football team. This time, it involves former player Caperton Humphrey, who claims the university offered to pay him $50,000 plus benefits to stay quiet relating to harassment from teammates that he had reported as a student-athlete.

According to the Kansas City-Star, Humphrey — who played for the Jayhawks’ football team in 2017 and 2018 — says the school did little to end threats and harassment from his teammates, despite several incidents being reported.

At one point, Caperton Humphrey claims someone loosened lug nuts on his car tires enough to make the wheel wobble. When he reported the incident to police, no arrest was made due to lack of evidence. And when the former KU player approached school officials about the incident — as well as seeing other players selling drugs at nearby campus apartments — nothing was done. In fact, the former player says Les Miles instead suggested the players work it out between themselves, rather than taking action himself.

Some of the details of Humphrey’s alleged harassment are frightening.

Moments after the men charged into his apartment, Caperton Humphrey remembered the baseball bat in his bedroom.

If they came at him — and Humphrey believed he saw the imprint of a pistol in one man’s jogging pants — he needed a plan to fight back.

For months, four of these men had been his teammates on the Kansas Jayhawks football team. Now they and about a half-dozen others were in Humphrey’s living room, threatening him, his father Jamie, and even Caperton’s 15-year-old brother. Seconds later, Jamie Humphrey dialed 911, putting his phone on speaker before setting it on a counter.

The final resolution: KU’s athletic department agreeing to pay him more than $50,000 in benefits to go home after he reported threats and harassment from teammates.

The Star reported details of the proposed deal between KU and Caperton Humphrey as well.

Naturally, the Kansas football team remained silent regarding the allegations. Likewise, the school’s AD, Jeff Long, as well as Les Miles’ representatives did not respond to a request by the Kansas City-Star regarding the story.

“Les Miles and Jeff Long swept this under the rug and tried to buy our silence,” Jamie Humphrey (Caperton’s dad) said. “This is how they operated while representing Kansas.”

Given the seriousness of the threats and harassment, the former Kansas football player has battled depression and began seeing a psychiatrist to help him recover emotionally. The family is considering next steps against the university, which includes a possible lawsuit for presenting such a bribe.