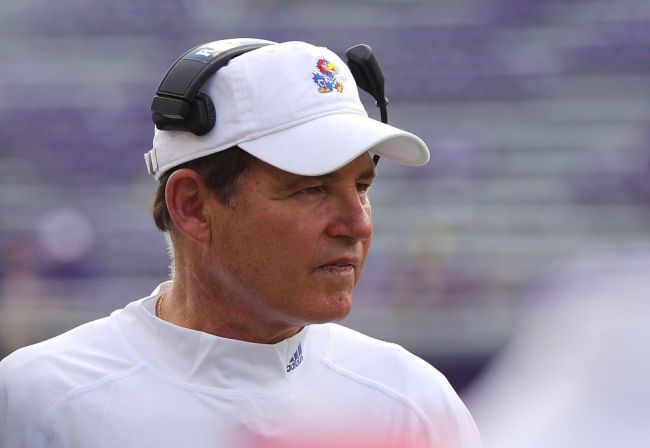 Les Miles is out as the head coach of Kansas University football. The two parties have mutually agreed to part ways after a 2013 investigation into Miles’ conduct at LSU surfaced earlier this month. He was accused of inappropriate relations with students on multiple occasions while with the Tigers and was reportedly asked not to contact females while with the school. Miles was the head coach in Baton Rouge from 2005-16 and accepted a job with the Jayhawks in 2019.

The school placed the 67-year-old on indefinite leave shortly after the allegations came to public light, which is now finite with his resignation. It is effective immediately and Kansas will begin a coaching search with help from an outside firm. Athletic Director Jeff Long didn’t mention the investigation or the reason for the move in his statement.

The University of Kansas and Les Miles have mutually agreed to part ways effective immediately.

Miles’ lawyer made a statement that denied any wrong doing for his client as recent as March 6, but the writing was on the wall and the agreement comes as no surprise. New York-based attorney Peter Ginsberg said:

“The events of the past twenty-four hours are deeply disturbing. Eight years ago, LSU hired Taylor Porter, a preeminent law firm, to conduct an extensive and thorough investigation of allegations lodged at Les Miles. Under the guidance of one of the nation’s leaders in the area of gender discrimination and harassment, Taylor Porter concluded that Coach Miles did not engage in any conduct that constituted sexual harassment and that there were no grounds to discipline Coach Miles. Now, eight years later, LSU, in the wake of enormous pressure from the NCAA for conduct that has nothing to do with Coach Miles, issued a report conducted by Husch Blackwell.”

In additions to the alleged misconduct, reports were filed regarding Miles’ behavior in the work place. He is said to have mandated that workers who worked in the school’s recruiting department needed to be attractive, fit and blonde. His statement did not address the report:

“This is certainly a difficult day for me and for my family. I love this university and the young men in our football program. I have truly enjoyed being the head coach at KU and know that it is in a better place now than when I arrived. To our student-athletes, I want you to remember that you came to play for KU and earn a degree here. So, I implore you to stay and build on what we started and do all of the things we talked about doing together. There is a bright future for all of you and for KU Football.”

There is a high probability that this will mark the end of Miles’ career. He has one National Championship and two Southeastern Conference titles to his name, but it is quite the fall from grace for the Mad Hatter.