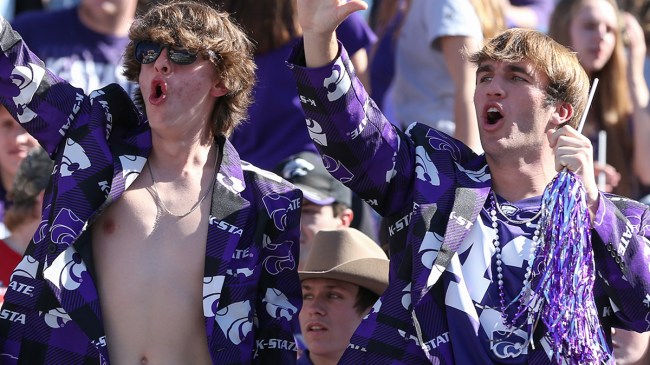 If you’re a fairly dedicated college football fan, then you’re likely familiar with the controversy surrounding “Neck,” the song that the LSU band occasionally plays at games despite the fine they face for violating a ban on the tune stemming from the student section’s tendency to pull out a vulgar chant instructing their opponents to suck, um, a certain part of a tiger’s anatomy.

Of course, the nature of that forbidden fruit makes it all the more alluring to a point where Odell Beckham Jr. unsuccessfully tried to bribe the band to play “Neck” during the national championship game in 2020 (although it—and the chant in question—eventually made an appearance toward the end of the contest).

LSU is obviously far from the only school that’s forced to grapple with negative optics related to events where thousands of rowdy and varyingly intoxicated college kids gather to cheer on their team—including the shenanigans that have now landed the student section at Kansas State in hot water.

Even if you’re not a fan of the Wildcats, you’re likely familiar with “The Wabash Cannonball,” the fight song with a fairly fascinating origin story that’s been a gameday tradition in Manhattan since the late 1960s.

However, it appears that the beloved pastime is now in jeopardy.

According to KSNT‘s Landon Reinhardt, administrators at Kansas State have had discussions with members of the band and suggested it’s in their best interest to inform their fellow students that “The Wabash Cannonball” could end up getting the “Neck” treatment if undergrads refuse to stop spicing it up with the “F—k KU” chant (a reference to the rival Jayhawks) that could be heard during the season opener.

K-State band students are being told to spread the word:

It’s also worth noting the issue can at least partially be traced back to Kansas State’s decision to ban “Sandstorm” from games in 2015  over the exact same chant; even if the university follows through on its threat, it seems like it will only be a matter of time until another song gets the same treatment.