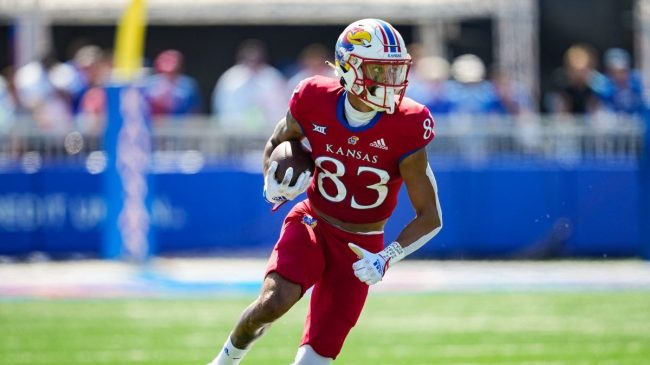 The Kansas Jayhawks football program is currently in the midst of an historically great start to its season under head coach Lance Leipold.

The Jayhawks are 4-0 and ranked No. 19 in the country in the AP Top 25. But beyond that, Kansas played host to ESPN’s College GameDay for the first time in program history on Saturday morning.

Leipold and the Jayhawks welcomed No. 17 TCU for a Big 12 showdown with first place in the conference on the line. Unfortunately, things didn’t start particularly well for Kansas. Star quarterback Jalon Daniels left the game with a right shoulder injury in the second quarter.

Daniels did not return and the Jayhawks went into the half trailing the Horned Frogs, 10-3.

The second half, however, has been an entirely different game. Backup quarterback Jason Bean took the reins for the hosts and led them right down the field to tie the game at 10-10.

TCU and Kansas then went back and forth, touchdown for touchdown, with the Horned Frogs holding a 31-24 lead late in the fourth quarter.

That’s when the remarkable happened.

But Skinner had a little bit of magic for the Kansas crowd.

Skinner laid out to catch the ball at full extension while somehow managing to keep his right foot in bounds.

Unfortunately for the home fans, TCU marched right back down the field and scored an incredible touchdown of their own to go ahead and eventually win, 38-31.

TCU GETS IT RIGHT BACK! WHAT A CATCH BY QUENTIN JOHNSTON🔥

Either way, you’re not likely to see a better catch all year long and the Jayhawks are very clearly forreal.