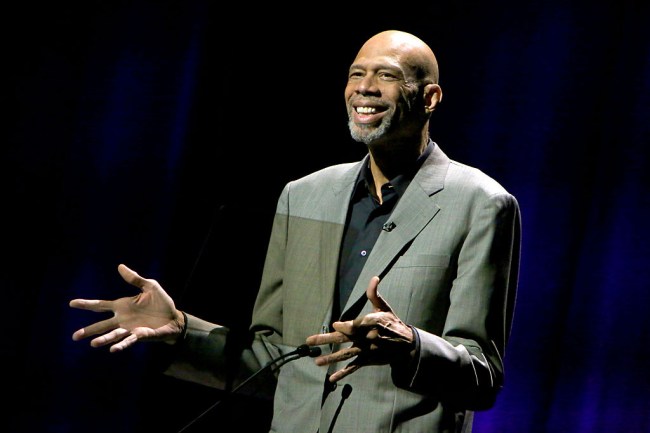 If you’ve ever seen the fantastic 30 For 30 that is Broke, you know exactly how easy it is for athletes to burn through the tens of millions of dollars they earned over the course of their careers, whether it’s due to reckless spending habits, gambling problems, or a cousin who convinced them that investing in a chain of drive-thru laundromats would pay off in the long run.

As a result, you have tons of people who have been forced to pull a Russell Crowe and auction off their belongings in an attempt to get themselves out of the hole—assuming they just don’t roll up to a pawn shop with a bag full of rings and trophies.

Consequently, I was a bit worried when I heard Kareem Abdul-Jabbar was holding an auction of his own featuring a treasure trove of sports memorabilia from his storied career, including championship rings and game-worn uniforms.

The Lakers legend has had some financial problems in the past—he found himself $9 million in debt after a sketchy money manager screwed him over in the 1980s. However, he managed to get things back on track and had a net worth around $20 million a few years ago (presumably thanks in no small part to those sweet, sweet Airplane! royalties).

So what went wrong? Thankfully, things aren’t as they seem.

According to the auction page, Abdul-Jabbar has been collecting items from around the world since getting his financial situation figured out and has amassed a collection of antiques and treasures over the past couple of decades.

After presumably watching Marie Kondo’s show on Netflix, the superstar realized he was sitting on a treasure trove of items that don’t bring him joy in the form of personal memorabilia from his playing days.

As a result, he’s decided to auction off a number of items and will be using the proceeded for an absolutely fantastic cause:

Much of the proceeds from my auction will go to support my charity, the Skyhook Foundation, whose mission is to “give kids a shot that can’t be blocked.” We do this by sending children from economically challenged schools to five days in the Angeles National Forest to experience the wonders of nature and learn the basics about science, technology, and engineering.

Camp Skyhook is an immersive hands-on experience that takes kids out of school for 5 days and 4 nights. They go from auditory learning to utilizing all of their senses in the great outdoors. Our hope is not just to get them out of the city to commune with the outdoors, but to stimulate an interest in the sciences that might lead them to fulfilling careers.

If you’re in the mood to pull an Antoine Walker and make some reckless purchases of your own, you can bid on the collection until the auction closes on March 2nd.