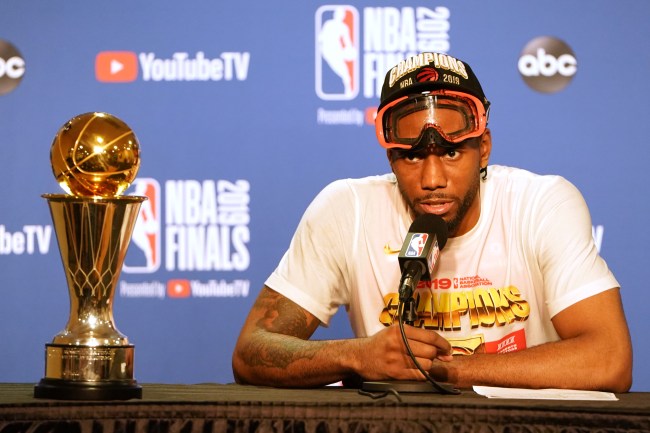 Don’t you love this time of year? An NBA player in free agency can’t eat at Chipotle without social media buzzing about him moving to Mexico to play in the Liga Nacional de Baloncesto Profesional.

NBA conspiracy theories are in full swing (See: People thinking Kyrie Irving called into a Boston radio show using a fake name to defend his honor). Kahwi Leonard can’t leave his home without rampant speculation. Reports of Kawhi Leonard prioritizing the Los Angeles Clippers has sent the organization into “hyperventilation” mode, while the Raptors reportedly still have “work to do” to re-sign him.

We are less than two weeks away from free agency and Kawhi Leonard just sent an already-terrified Raptors fanbase into chaos after he was spotted on Wednesday at a Home Depot in Yorkdale, Toronto carrying out large moving boxes.

Just to add to the Kawhi Leonard frenzy: A friend of mine works at Home Depot and spotted Kawhi Leonard there; his purchase: moving boxes (maybe he purchased a bigger home in Toronto!) #Raptors pic.twitter.com/6XvCZq7Zmk

My first thought was: Good on Kawhi for not hiring movers and going to Home Depot himself to dohttps://twitter.com/ro_mundo/status/1141848808265048065 a task no one wants to do, especially someone who is about to sign a nine-figure deal.

My second thought was: KASJDSIOFHSDJHBSHJDB!!!!!

I can’t image how tight the buttholes are in the city of Toronto right now. Humor is essential in these uncertain times…

Maybe he is buying them to make a fort?

He’s making a robot out of cardboard boxes. pic.twitter.com/QphCCqgZa5

Laugh so you don’t cry. God, I love this league.