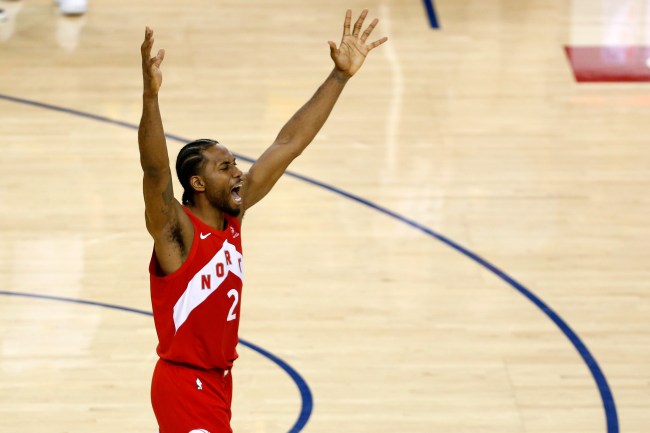 Kawhi Leonard instantly became the biggest superstar on the NBA free agent market following the injury to Kevin Durant during the NBA Finals, and he knew that he was going to drive a hard bargain in order to get everything he wanted before signing with a franchise. And while there were multiple rumors floating around about where Leonard may have ultimately ended up, he landed on the Los Angeles Clippers, even slyly maneuvering the team to trade for fellow All-Star Paul George — so he seemed to get the things he wanted most.

Prior to Kawhi signing with the Clippers, there were reports about some demands that Leonard had requested from teams during some of his free agent meetings — which, allegedly, included a vow of secrecy that may have hurt the L.A. Lakers’ chances of obtaining him. But a new report goes even further, going as far as saying that some of the things Kawhi Leonard and his camp, namely his uncle, Dennis Robertson, were asking for were “unreasonable.”

That’s according to TSN‘s John Lewenberg, who described some of what he’s heard from sources about how Leonard’s Uncle Dennis drove a tough bargain during negotiations.

Robertson has a reputation for being hard to deal with and would have been hands on throughout the process. According to sources, Leonard and his camp – namely Uncle Dennis – asked for a lot from the Raptors in that meeting, things players don’t generally ask for in standard contract negotiations.

In some cases, they were asking for things that Ujiri – one of the most well-compensated executives in the league – wouldn’t have even had at his disposal. Their requests were “unreasonable”, a source said, which made the Raptors wonder whether Leonard was seriously considering them at all.

Considering Kawhi Leonard delayed a free agent decision after many of the other superstars had already decided their futures, this report might explain why he did so — because he wanted to work on getting another All-Star like George to follow him, not have himself join another superstar like LeBron James. It also may be a punch in the gut to Raptors fans, who could take this as a slight towards the legitimacy in having Kawhi ever re-upping with the team. Then again, he did just win them a title, so, hopefully, there isn’t any ill-will towards him.

When the dust finally settled, the Clippers got their guys in Leonard and George, the Lakers got their second star in Anthony Davis to pair with James and the Raptors have a championship banner to hang, so everyone seems to have gotten exactly what they wanted.