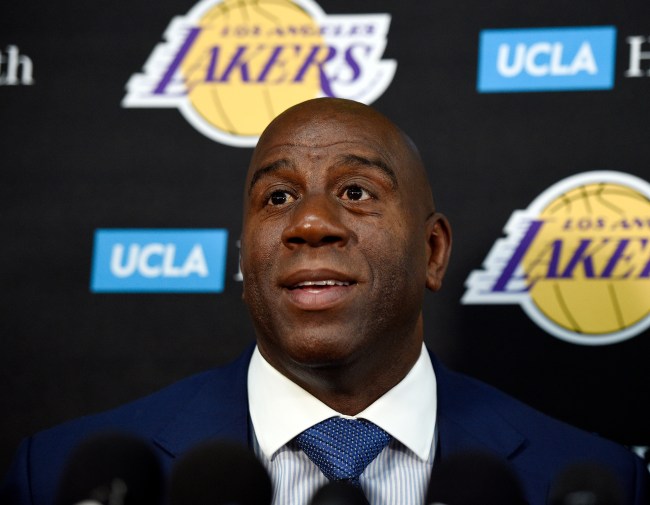 Magic Johnson’s one of the greatest players to ever don a Los Angeles Lakers uniform, and, although he’s done a ton for the franchise as a player, head coach, ambassador and executive, he may have hurt the team’s chances at landing prized free agent Kawhi Leonard this offseason. That’s because, while Magic has the best interest in mind when it comes to the Lakers — something he continues to publicly talk about even after the dysfunction he helped cause as the team’s president of basketball operations — because he’s as outspoken as anybody, Magic Johnson may have revealed too much about his recruiting efforts on Leonard.

That’s the notion made by FS1’s Cris Carter, who both tweeted out and then reiterated on TV that Magic Johnson’s blabbermouth did more harm than good when it came to pitching Kawhi. Here’s what Carter had to say on two separate occasions.

All the information that leaked from Magic’s conversations with Kawhi team didn’t help the Lakers case.

"The Lakers made a lot of mistakes. The intel Magic Johnson let out of that meeting was a mistake. Kawhi didn't have the trust in the organization, in the front office, or in their medical staff. Kawhi just level set the league." — @criscarter80 pic.twitter.com/PV4jvc2WNb

Now, say what you want to about Cris Carter — because some look at him as nothing more than a talking head, not someone with serious reporting skills or sources — but the facts are there to at least wonder if he’s got a point here. After all, Kawhi Leonard is one of the most private athletes we’ve ever seen, not only refusing to show much emotion at all, but also being capable of maneuvering a sneaky trade to get Paul George to the Clippers without any intel at all about it. That’s impressive.

On the flip side, Magic Johnson loves attention and entertainment. He’s a showman who constantly got the Lakers fined for tampering while in the front office because of his candidness, and, in part, quit his executive job so that he could openly talk about basketball and other players without consequence. The fact that Johnson leaked details about what Kawhi Leonard wanted from teams during his conversations in free agency probably led to some mistrust and proof of dysfunction, which was something that was reported from various outlets.

It’s easy to pile on Magic Johnson for being too flamboyant or open or revealing here — especially after seeing how he’s like the ex who just won’t stop lurking around the Lakers organization — but, this time, it seems like he may have done more bad than good when recruiting Leonard, and now the team’s fans need to watch Kawhi hoop it up for the Clippers instead.