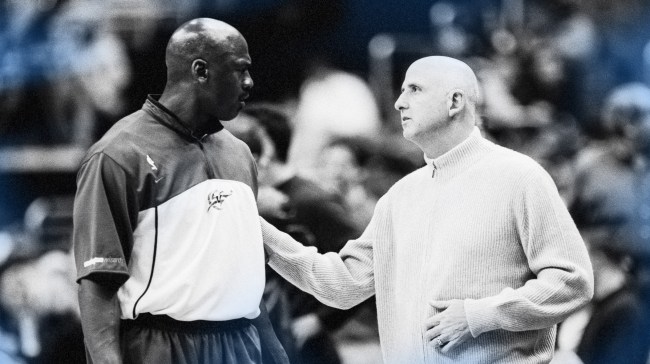 Recently, on SiriusXM NBA Radio, Michael Jordan’s former agent David Falk made some wild claims about how well he thinks MJ would do if he was playing in today’s NBA.

“I said this publicly, I think he’d average 60,” said Falk. “I think he’d shoot 75 percent from the floor… I don’t think the talent today is nearly as deep as in Michael’s era. Today, if you ask me how many superstars there are in the NBA today, I’d say four or five. In Michael’s era, there was probably 25.”

Falk also said he believes the player he’s seen come closest to Jordan “in terms of his intensity, his athleticism, his burning desire to win” was Kobe Bryant.

He also pointed out how Jordan would have wanted no part of being a member of one of today’s NBA “superteams.”

“If you ask Jordan tomorrow, ‘Did you ever want to play with Bird and Magic?’ He’d look at you like you’re on crack and say ‘not a chance in the world. I loved those guys, but I wanted to kick their butt, every single night.’”

Former NBA player Kendrick Perkins wasn’t having it and went on a rant about how ridiculous he thought Falk’s claims MJ averaging 60 on 75 percent shooting were on ESPN’s The Jump.

“That’s BS. You know, the bad part about it was that he was dead serious,” said Perkins. “Look, David Falk might be sitting back sipping too much of that moonshine because to say that Michael Jordan would average 60 points on 75 percent shooting, that is absurd! I wouldn’t even do that when I be going to the LA fitness. I’ll be going getting buckets.

“But to say so, to disrespect this generation like that–it’s just disturbing to me. And he’s out of like [saying] Jordan with an average 60 points and 75 percent shooting, that’s just crazy!”