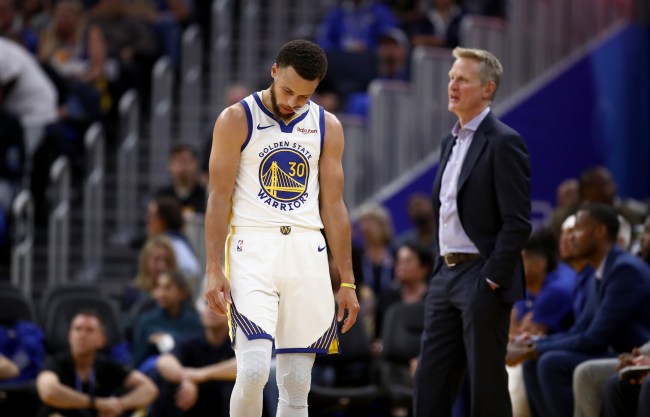 Through the first 96 minutes of the regular season, it would be crazy for anyone to grab a shovel and start digging the Golden State Warriors a shallow grave to die in.

With that said, no rational human could have possibly predicted how poorly even a Durant-less, Thompson-less Warriors team would perform throughout the first two contests. The Warriors have yet to hold a lead in blowout losses to the Clippers and new-look Thunder team that at one point, held a 40-point lead before coasting to a 28-point W.

The Warriors are by far and away the worst defensive team in the league and boast the NBA’s worst effective field goal percentage.

While Steph Curry is averaging 23 points, 6 rebounds, and 4.5 assists per game, he is shooting a dismal 39.5% from the field and 20% from three. These are lightyears behind his career percentages of 47.6% and 43.6%, respectively.

Former NBA player turned analyst Kendrick Perkins is seemingly relishing in the Warriors inability to figure it out.

Thunder giving Golden State that work right now! It’s no Fun when the Rabbit got the Gun! Now we get to see what Steve Kerr is really about!!!

We calling our Kerr but same for Steph. His job is to keep them in games no matter what. The same way Russ, Bron and other elite players had to do when they were short handed.

Getting blown out is not excused when you’re elite.

Mind you, Perkins, whose Cavalier team lost to the Warriors twice in the NBA Finals, has historically been critical of Steph Curry, even when they mushroom-stamping every team in the league.

Steph Curry gets in Kendrick Perkins' face after Steph trips on Perk's legs on final shot of third quarter pic.twitter.com/ScS8FBFVRZ

During the NBA Finals last season, Perk passionately argued that the media gives Steph Curry too many “passes” and implied that the two-time MVP shrinks in big moments.

“I feel like it’s unfair because any other superstar in the league don’t get as many passes as Steph Curry,” Perkins said. “Steph Curry gets pass after pass after pass, and he never steps up to the big plate. Think about this, the shots that Klay Thompson hit tonight, they wasn’t just easy shots. He had two or three people on him at times.”

I guess Klay return is messing up Steph rhythm? That will be the excuse everyone gives him tomorrow!

Kendrick Perkins has made it his life mission to avenge his two Finals losses to Steph Curry.