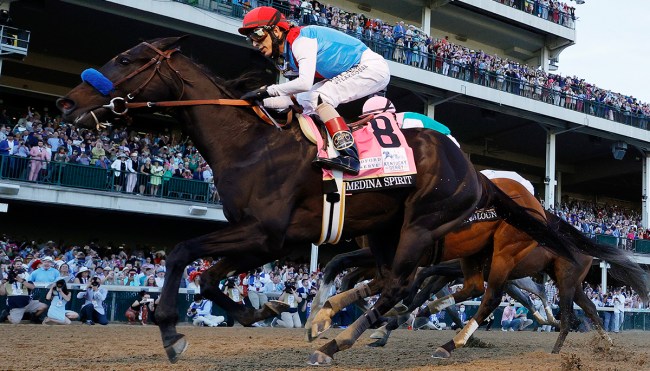 Last week, I was researching the fairly pitiful sports betting history of the man known as Mattress Mack, and while looking into his losing wager on 2021 Kentucky Derby favorite Essential Quality, I was surprised to discover Medina Spirit was still considered the official winner almost a year after the horse failed a drug test following the race.

However, that changed on Monday when Medina Spirit was officially disqualified a little over two months after trainer Bob Baffert found himself at the center of yet another controversy when the horse suddenly passed away during a training session.

It didn’t take long for Churchill Downs to immortalize Mandaloun, as last year’s runner-up is now honored at the racetrack where it was robbed of the chance to take a victory lap last year.

The paddock sign at Churchill Downs denoting Medina Spirit as winner of the 2021 Kentucky Derby is removed and replaced with one bearing Mandaloun’s name.@HR_Nation pic.twitter.com/wgheuNU5B2

Mandaloun’s owners will also be the recipients of the $1.8 million purse that was awarded to Medina Spirit, but as many bettors learned the hard way last year, anyone who was holding out hope they’ll be compensated for wagers they placed on the now-winner is likely out of luck (unlike those who profited from Medina Spirit’s win, who are in the clear).

However, that didn’t stop a number of gamblers who put money on a horse that left the starting gate as a 26-1 longshot from filing a lawsuit last year in the hopes they’d be able to claim the winnings they were deprived of,

Now, the Louisville Courier-Journal reports attorney Will Nefzger has refiled a class action lawsuit against Baffert and Churchill Downs on behalf of 19 people seeking the payments they feel they deserved for betting on Mandaloun.

In the complaint, Nefzger said he believes his clients are entitled to at least $1 million for the various wagers they placed and levied multiple allegations against the racetrack and the trainer while arguing they should be held accountable.

It seems like the odds of the plaintiffs winning the case are pretty slim, but with that said, the same could be said about Mandaloun’s chances heading into the race that sparked the case.