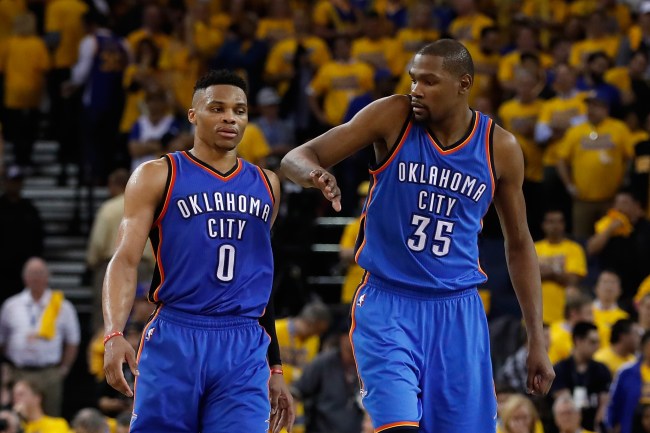 Durant appeared on Million Dollaz Worth of Game Podcast and offered up his take on the top 5 players he’s ever shared a jersey with, omitting former MVP and 2x All-NBA First Teamer Russell Westbrook in favor of…Serge Ibaka?

KD lists the top 5 players he’s played with… No Russ to be found 👀 pic.twitter.com/shUZ9RdzSM

After the hosts reminded KD of Russ’ existence, Durant was quick to amend his list and boot Ibaka from a list he has no business being on.

Here’s what happened after KD made his list. Imo there’s no way he could just forget to say Russ, and the only reason he said it was bcuz he doesn’t want beef. He picked Harden & Irving over Russ w/ only one season w them pretty much, over Russ too. I have no respect for him‼️🤡 pic.twitter.com/vV5Ga9TpV8

“I did forget about Russ. Russ would definitely be top 5. As a matter of fact, I’d put Russ fourth and Klay fifth.”

Still, some nifty editing in the initial clip caused many to dust off the “KD Petty AF” takes. But, like, how do you forget about a dude who’s logged 7 straight triple doubles and is 10 shy of Oscar Robertson’s career mark? Was this just a brain fart or a calculated omission from KD? We will never really know, but the internet has already made up its mind, including a guy who should know how sports media operates.

Cuz is a weirdo. This is just hating… serge fuckin ibaka thoo https://t.co/tjIeybExwA

*i forgot somebody* @KDTrey5 shut your stupid ass up. On god you’re the biggest bitch to ever touch a basketball and I ain’t even a fan of @russwest44 game like that. Sergei Ibaka fuck out here!!! https://t.co/vXW05RMgbY

He a suckers man 😑 how in the hell don’t remember Westbrook https://t.co/bF07POQkiB

So petty and bitter

Give me a break. He remembers serge Ibaka but forgets Westbrook … yeah right..

Bruh serge? Really? Just say you hate him and move on 🤦🏻‍♂️

Odds are, KD genuinely forgot about Russ. But given their history and Durant’s affinity for grudges, an over-reaction was destined to happen. You are who the public wants you to be. What a curse.