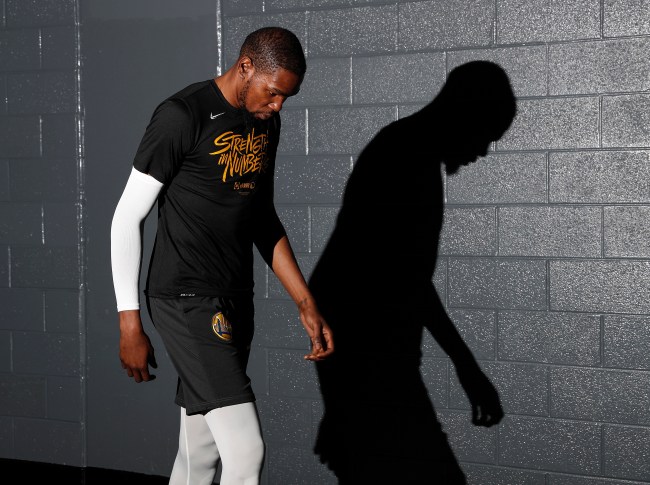 Kevin Durant might not be playing in the NBA Finals right now because of an injured right calf, but he’s still dominating headlines because, well, he’s one of the greatest players on the planet. It’s for that reason that Durant’s upcoming free-agency continues to be a hot topic, too, with rumors swirling that he’s either definitely headed to the New York Knicks, or he’s got a great shot at landing with the Los Angeles Clippers, among other rumors.

Although nobody knows for sure where Kevin Durant’s going to be playing next season, some people think that Nike, the apparel company that KD sponsors, just dropped a giant hint. That’s because the brand is currently selling a shirt online that lists all the cities in which Durant has played, with each being crossed off as his chapter in each ends. The last city on the Nike shirt? Well, it’s neither New York nor Los Angeles, but San Francisco, which is where the Warriors are moving to from Oakland to play its home games next season, making at least one person on Twitter think Kevin Durant’s staying with the Dubs. Take a look below.

Nike has this @KDTrey5 shirt on the site that has all the Teams/Cities KD has played for. The last 2 are Oakland & San Francisco. GSW last season in Oakland is this season. Next season they are in SF. Did @Nike confirm KD back to Warriors? #NBAFinals #Warriors #NBA pic.twitter.com/SsdX2iTlKd

Considering Nike is absurdly strategic in its marketing efforts, it’s hard to imagine the brand is accidentally selling a shirt that might have ruined any drama relating to Kevin Durant’s free-agency this summer. Plus, there’s a good chance in hell Durant doesn’t even know where he’ll be playing, so Nike seems to just be staying status quo by selling shirts that people can buy that presumes the two-time NBA Finals MVP is staying with the Warriors — and if he ends up leaving, hey, at least Nike made some money for a shirt that becomes outdated.

Given Kevin Durant’s interest in investing in Silicon Valley and hoping to build an empire off the court, staying in the Bay Area beyond this season seems like a good bet. And as the best player on the best team in the league, coming back to the Warriors next year — if even on a short-term deal — gives him the best chance to add championships, too, so maybe this Nike shirt really is actually on to something?