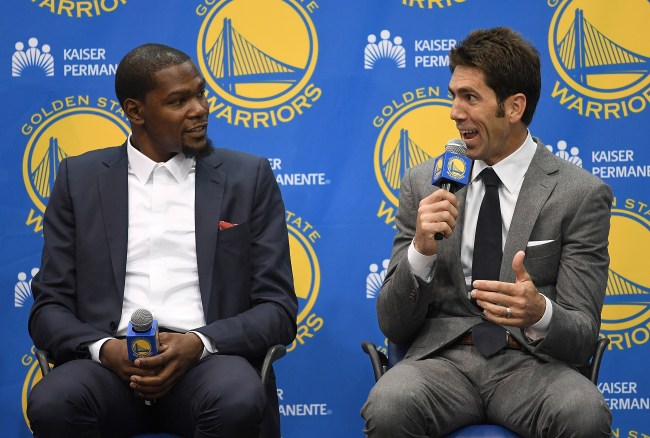 Kevin Durant may have bolted from the Golden State Warriors for the Brooklyn Nets this summer, but, after ending a three-year run that saw two championships in three NBA Finals’ trips, there’s nothing but love from the Warriors’ general manager Bob Myers. That was evident in an interview that Myers gave yesterday about the current state of the franchise, with, naturally, Durant’s name coming up.

Myers, who was the man tasked with delivering the devastating news that Kevin Durant had blown out his Achilles during last season’s NBA Finals against the Toronto Raptors — with the executive holding back tears as he addressed the media — gave a first-class reply when KD leaving got mentioned, with Myers recounting some of the memories he’ll take from the one-time league MVP’s time in the Bay Area. Take a look at what the GM had to say.

“I have a peace about it,” Myers said Monday as he discussed the Warriors’ flurry of moves in free agency.

“You do the best you can,” Myers said. “I think all along, to me it was a blessing that he came, that he wanted to be a part of this. This is a guy who can move in whatever direction he wants because of his talent. He came and he delivered. In my opinion he was everything we could have asked for. He represented us on the court, he represented us off the court. He still has a great relationship with a lot of his teammates, our staff, our coaching staff, myself. He just wanted to try something new, and that’s OK. I don’t look back and say, ‘If this or that,’ I don’t feel that way.”

“I talked to him until I wasn’t allowed to talk to him a few days later,” Myers said with a chuckle, recalling how regularly they had discussions during Durant’s three years in the Bay Area. “It wasn’t like slamming the door. To be honest I was kind of sad, I was, because I like him. The other thing is, I love basketball, so just to watch him play was a treat for me, just to watch him practice, to watch him work out. … I’ll miss that, I will, just as a basketball fan because guys like him don’t come along too often.

“I got to see him up close for three years of my life, and I’ll always remember that.”

You’ve got to admire Bob Myers’ honesty and respect for Kevin Durant here. He could’ve easily gone with the “no comment” route, played the “we’re only talking about guys who want to be here” card, or simply thrown some shade KD’s way. Instead, the executive spoke honestly about what it really felt like losing, arguably, the greatest basketball player on the planet. Considering Myers’ answer, it’s no surprise the Warriors are one of the top-notch franchises in all of sports, because it’s guys like this that players want to play for and respect the most.