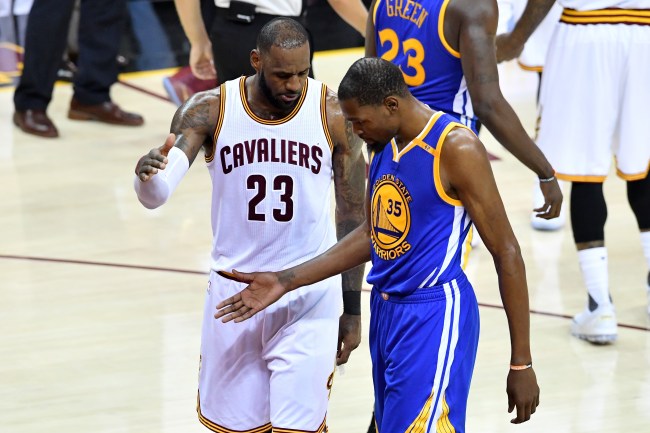 LeBron and KD are 1-1 against each other in the NBA Finals and nearly identical statistically.In 18 regular-season games against each other, Durant averages 28.9 points, while James tallies 28.8, Sporting News reports.

In an interview with Mark Medina of The Mercury News, Durant was transparent about how he compares to the greatest small forward of all-time.

“They have seen me play at the highest level and play against a guy who people say is continuously the best player ever,” Durant said. I feel like I proved myself and belong in that conversation.”

“Accolades and accomplishments and legacy and all that stuff and how they mean to people, I can’t talk on that,” Durant said. “But as far as basketball skills are concerned? I’m on the same level. I feel like that moment was [LeBron] saying: ‘Welcome.’”

The moment Durant speaks of is the three he hit over James in Game 3 of the NBA Finals last year, solidifying a win and pushing Golden State to a 3-0 lead, a deficit that has never been overcome in the history of professional basketball.

“When somebody passes the torch, they’re letting you in the room,” Durant said referencing his quote in GQ magazine. “You got LeBron. You got (Dwyane Wade). You got (Carmelo Anthony). You got Paul Pierce. You got Larry Bird. You got Dr. J all in a room. It’s my turn to be in there with them and enjoy being one of the best players in the world.”

We’ll see if Bron Bron has a rebuttal for Durant’s claim. [h/t The Mercury News]