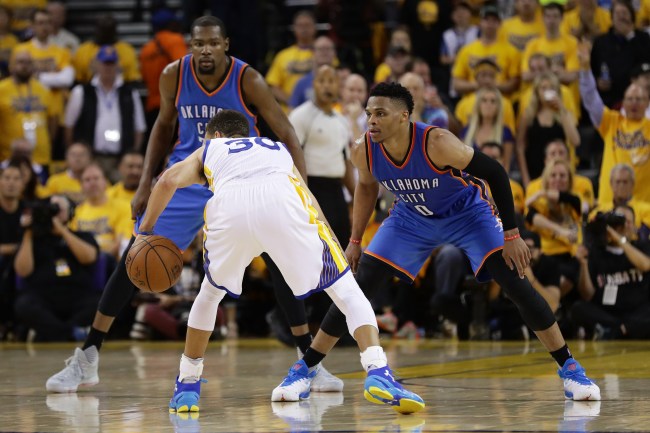 Has anyone checked on Russell Westbrook?

I’d venture to guess he’s in his garage throwing axes at a cutout face of Kevin Durant. After five years of treating each other like cheating exes, KD and Westbrook could paint on plastic smiles and be in the same zip code together.

We may be back to ground zero again after Durant revealed that the point guard he abandoned Westbrook for is a better player than him. That’s like your ex saying her new beau has a bigger meat popsicle than you. Even if he objectively does.

STEPH IS BETTER THAN RUSS pic.twitter.com/QZ2lK87v2r

Saying a three-time NBA champion and arguably the best shooter of all-time is better than Westbrook, or 99% of the NBA, is exactly a hot take. It would have been nice to hear what he had to say about Curry vs. Kyrie to bait him to talk shit about his current point guard.

Durant also revealed to Serge Ibaka why he chose to go to Brooklyn over the Knicks. Knicks fans, close your eyes.

“I think the Knicks players, they’re good young players but they still need a little bit more experience to match where I was in my career. So it was nothing major against the Knicks. I just think Brooklyn is farther along in the process of being a contender.”