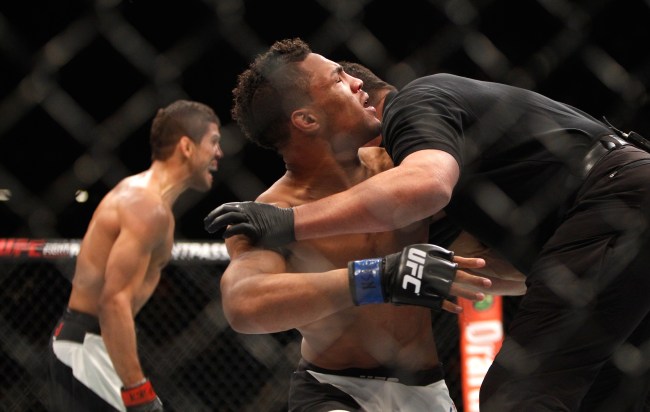 It takes a certain level of psychosis to enter into a profession where the goal is to physically destroy the man in front of you in a cage.

American heavyweight Deontay Wilder shed some dark truths on the combat profession earlier this week, saying, “this is the only sport where you can kill a man and get paid for it at the same time.

UFC lightweight/welterweight fighter Kevin Lee knows all too well of the dangers of combat, but is also nuanced in the hazards of cutting weight. The 26-year-old Michigan native will square off against former UFC lightweight champ Rafael dos Anjos in Saturday’s main even at UFC Rochester. Thankfully, the #7 lightweight fighter in the world is climbing up a weight class to welterweight (170 pounds) for the first time in his career, which means he can avoid the insane weight loss practices he’s accustomed to.

Lee told MMA Junkie this week about a wild weight cutting technique he used to get down to 155 for a battle with Tony Ferguson at UFC 216. Lee had to cut 20 pounds in 24 hours (yes, you read that correctly) and an infection made it more difficult to achieve. His trainers threw him in a tub and added boiling water to raise his body temperature and rid it of water weight.

So, about that time Kevin Lee (@MoTownPhenom) had boiling water poured on him during a weight cut to 155 … 😟 #UFCRochester

Back in 2017, Lee spoke of the excruciating method in a podcast conversation with former UFC middleweight title challenger Chael Sonnen:

“The first three hours I only got a pound off. Put yourself in my shoes, it’s 8:00, the weigh-ins start at 9:00, and I’ve still got five pounds to cut; so they’re literally throwing boiling water into the hot tub with me because I’ve got to get it off now, get it off quick. So right around 10:30 is when the doctor came up and we were still a pound and a half over and he was saying I had to weigh in by 11:00 and then they’d give me the extra hour. I was hoping that somehow their scale was off and they would just give me the pound. I was hoping and I was praying but it was what it was. That last hour that I had to cut that extra pound, I don’t even know how I got it off. I don’t know where I was. Your mind just doesn’t want to work when you’re in those kind of states. Like I said, I don’t even remember much. I don’t really know. I was kind of out of it and I just left it up to my coaches and they got the job done. Once I actually made the weight, as soon as I sat down I was more exhausted than I – I don’t think I’ve ever really felt like that in my life. I was carrying the stress of the whole event too so it was a lot.” [via MMA Mania]

Lee would eventually lose the fight against Ferguson via a third-round submission. Not surprised, can’t imagine draining your entire body of fluids can be good for endurance.