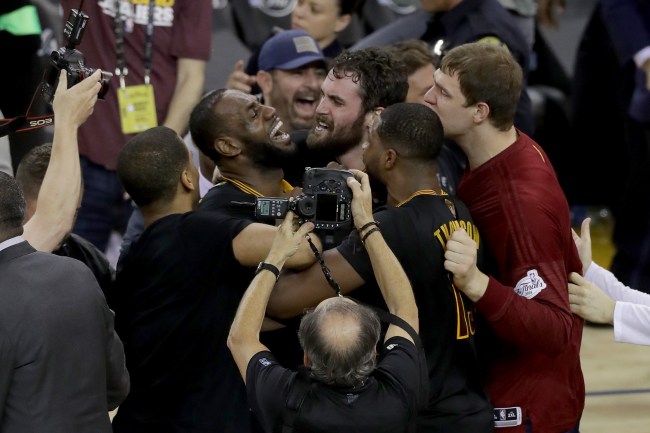 Kevin Love might be the only superstar left on the Cleveland Cavs right now — with former All-Stars LeBron James and Kyrie Irving leaving either through trade or free agency over the past few years — but he’s still got a championship from this time playing alongside those guys. And, while K-Love might be stuck on a team bound for the lottery the next few years as they rebuild, he’s still being asked about that epic 2016 NBA Finals comeback that saw the Cavs become the only team in NBA history to overcome a 3-1 series deficit, ultimately shocking the Golden State Warriors in seven games.

That 2016 NBA Finals was one of the most epic in league history. Not only did it feature the greatest regular season team ever — as the Warriors won 73 games that season — but it had bonafide Hall of Famers on each roster, with James, Irving and Love matching up against Steph Curry, Klay Thompson and Draymond Green. It included a bunch of shit talk. It had ups and downs. It had crazy emotion. And, in the end, it took some serious guile for the Cavs to, somehow, shock the world to win it.

So, how’d the Cavs pull it off? Kevin Love helped explain some of the motivation and inspiring words that led to the entire team rallying together, with LeBron James leading the charge.

Speaking to House of Highlights about the 2016 NBA Finals, Love detailed some of the ways James got his teammates’ attention, which started on the flight to San Francisco before Game 5 when he heard Klay Thompson compare his Warriors team to the Showtime Lakers, which didn’t sit well with the four-time league MVP. Take a look below at what Kevin Love had to say.

As Kevin Love explained above, not only did James motivate his teammates by feeling disrespected from Thompson’s words, but he then went out and played with a chip on his shoulder, dropping 41 in Game 5 to stave off elimination, winning Game 6 and then, of course, sprinting from halfcourt for “the block” in Game 7 that helped secure the Cavs’ first ever NBA title.

If you’re an NBA fan, the 2016 NBA Finals was one of the most entertaining series in league history. And the fact that, even three years later, the legend of it continues to be talked about proves that it will forever live on for eternity.