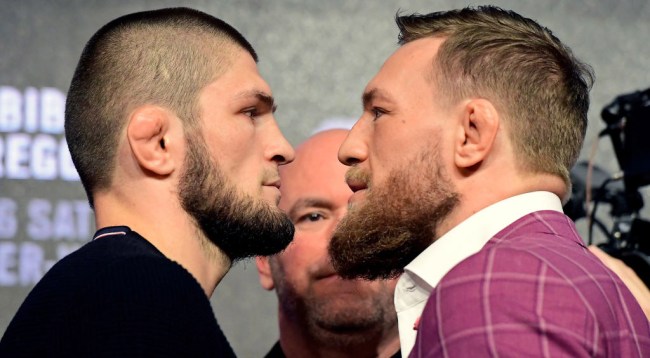 After his misguided behavior of jumping into the crowd to fight a member of Conor McGregor’s team following UFC 229, Khabib Nurmagomedov sounded more concerned with what his father Abdulmanap Nurmagomedov would do to him than the UFC or the Nevada State Athletic Commission.

During his brief appearance at the post-fight press conference, Khabib said, “I know my father going to smash me.”

Really can’t blame him for his concern there either, as his dad did have him fighting bears as a kid.

Khabib’s father, after all was said and done, told the media, “My team has always been famous for discipline. So the sanctions against Khabib will be tougher than the UFC.”

Abdulmanap was also one of the first to fire a shot back at McGregor following his son’s domination of “The Notorious One.”

“What a big difference between what said and happened,” he wrote on Instagram.

That being said, Khabib’s father seems like a much better sport than his son, writing on Instagram on Tuesday, “Assalamualeikum all. I forgive Conor McGregor, all in the past. It is necessary to make an analysis of everything that happened and learn lessons. After talking with aksakals and wise countrymen, they decided to move to other heights. I hope this is a blessing. Ying Sha Allag.”

That’s a pretty big act of forgiveness considering McGregor publicly called him a “quivering coward” and referring to his son as a “smelly Dagestani rat,” among other things.

Khabib’s father also delivered a press statement in Dagestan, and I have to say, I do like his style.