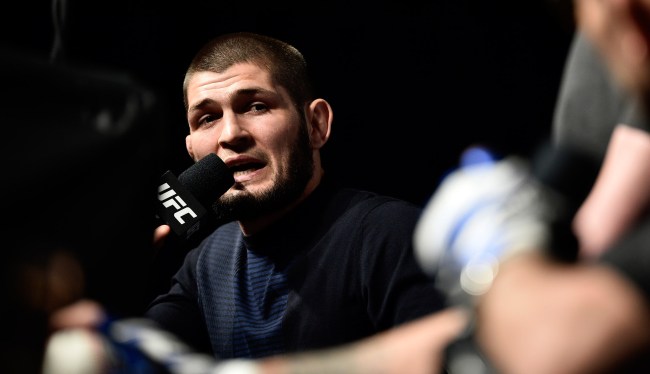 As he prepares to defend his UFC lightweight championship against Justin Gaethje (22-2) on October 24 at UFC 254, the undefeated Khabib Nurmagomedov was asked about the rumor that UFC president Dana White was going to offer him and his nemesis Conor McGregor the chance to square off again, first as coaches of The Ultimate Fighter and then in a rematch inside the octagon.

White revealed recently that Khabib (28-0) turned down the offer of coaching The Ultimate Fighter 29 after seeing McGregor (22-4) post private messages between himself and White.

“(Khabib) was gonna do it until Conor did all this sh-t,” White said recently. “That’s what I was saying. I felt like I was in a good place and I was gonna get that done. So we were gonna do The Ultimate Fighter on ESPN and f—ng do the rematch. But Conor blew that. Khabib said, ‘F— him.’ That was it.”

In an interview with ESPN this week, Khabib doubled down on his stance on working with and/or fighting Conor McGregor.

“It’s done. Everything is done. October 6, I finish him. I finish everything about him.”

Nurmagomedov, who has openly talked about retiring should he win his next two fights and go to 30-0, added, “I had new challenge in Dustin Poirier and now Justin Gaethje. We’ll see who it’s going to be next, but I don’t think it’s going to be Conor McGregor.”

Khabib takes on Gaethje (22-2) at UFC 254 in Yas Island in Abu Dhabi. Should he win, as he predicts he will, perhaps he can finally coax Georges St-Pierre out of retirement for one last big money fight before they both ride off into the sunset as two of the GOATs of MMA.