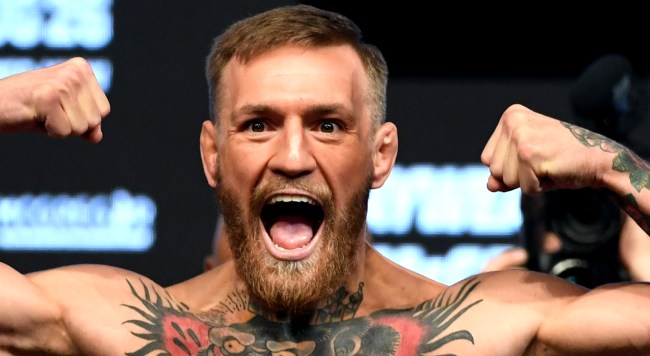 For some reason, UFC star Conor McGregor decided to shave his head and his trademark beard and now he looks almost unrecognizable.

Perhaps it’s just one more way for the two-time UFC champion to stay in the public spotlight since he has only actually fought inside the octagon two times since November 12, 2016.

Back in May, McGregor “accepted” a superfight between himself and another UFC legend Anderson Silva.

In June, Conor “retired” from MMA competition saying he was “bored of the game.”

Then in August, McGregor announced his engagement to long-time girlfriend and mother of his two children, Dee Devlin.

A month later, it was revealed that The Notorious One was still in the U.S. Anti-Doping Agency drug testing pool, which means he isn’t actually officially retired from MMA.

A couple of weeks later, McGregor announced he was going to box Manny Pacquiao.

And now, on Tuesday, Conor posted a photo to Instagram showing him with a clean-shaven head and chin after playing “football with the locals.”

Day at the beach playing football with the locals. Check out my story now for touch, control, delivery, athleticism, and my forté, showing off 😂 @mcgregorfast

FAST athlete, we are not paid by the hour. @McGregorFast pic.twitter.com/1HYMUHXxUa

So, yeah, he’s been a very busy man, doing nothing, yet still getting his much-needed attention despite not actually fighting.

Why he has chosen now to completely change his look is a mystery, but TMZ points out that that last time McGregor looked like this was in 2012 in a Cage Warriors victory against Dave Hill.

A good days work today on the program. @McGregorFast pic.twitter.com/61nABXoSwp

In actual MMA news regarding McGregor, UFC president Dana White says he has reached out with offers to Conor and Dustin Poirier, who McGregor recently challenged to a fight in Dublin for charity.

As I was writing this, McGregor posted to Twitter accouncing he and Poirer would be fighting on Dec. 12, but it will just be a sparring match.