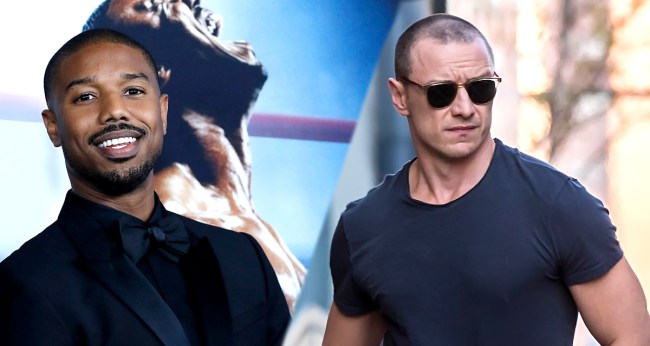 Being a famous celebrity these days means that almost any barely perceptible change in one’s body type will be scrutinized and analyzed by countless numbers of people, like it or not.

Often these body transformations occur because the celebrity is preparing for a role in a film which requires them to look a certain way.

Other times it’s just because the celebrity wants to be more healthy and make a positive life change.

Sometimes they just have to if they want to live.

Regardless of the reason, it’s never easy.

Sure, it’s probably easier for them since many have access to specialists in nutrition, exercise and weightlifting, but that doesn’t mean we can’t take the lessons they’ve learned, and often shared, and help ourselves out a little bit.

Below are 11 of the most impressive celebrity body transformations we’re seen over the past few years along with some helpful information about how they were able to achieve these fitness goals.

Jordan’s trainer Corey Calliet explained that in order to put on the weight needed for Jordan to play a heavyweight in Creed II they focused on using dedicated circuits, focusing especially hard on the shoulders.

As anyone who has seen the film knows, it definitely paid off.

McAvoy had to beef up for his role in the film Glass because as we saw in Split his character Kevin Wendell Crumb was turning into The Beast.

To accomplish that, McAvoy said he worked out for four months with Magnus Lygdback, the same guy who trained Alicia Vikander to be Lara Croft and Alexander Skarsgard to be Tarzan.

Speaking of Alexander Skarsgard, Lygdback explained the intense four-month long program was broken down into body parts – with legs, chest and front delts, back and rear delts and a whole day devoted to biceps and triceps.

Movement training involving yoga or obstacle courses was also key because Lygdback wanted Skarsgard to look less like a boydbuilder and more like a guy who got ripped living in the jungle.

One of the surest ways to get in shape is be cast in a movie as a boxer. Especially when that boxer is Mike freaking Tyson.

To do such a thing, Jamie Foxx, at age 52, had to really ramp up his training which included, among other things, a daily workout regimen of 60 pull ups, 60 dips, 100 push ups.

Another great way to motivate yourself to get in better shape is to be cast as a superhero in a movie like Marvel’s Eternals.

In order to properly portray his character in Eternals, whose secret identity is a jacked Bollywood actor, Kumail Nanjiani felt he needed to transform himself completely using exercise and numerous lifts including a lot of squats for his legs and core, low cable scoops to build up his chest, three different types of dumbell sets for his shoulders, electric stimulation of his biceps and a whole lot more.

Imagine Dragons lead singer Dan Reynolds, who suffers from inflammation of the joints of the spine, completely remade himself using a new exercise routine, diet, and lifestyle, which he chronicled extensively on his social media channels.

Mac from It’s Always Sunny in Philadelphia was once the main character in an episode called “How Mac Got Fat?”

So how did Mac Get Ripped? McElhenney said, “Losing it is easy. You just stop eating so f***ing much. [I’m also] working out three times a week. Regardless of your metabolism, if you stop consuming so many calories, you will lose weight.”

Wahlberg has always been in good shape, but in 2019 he showed that even he could have a “life changing” body transformation.

The then 48-year-old actor credited his insane body by going on a “45-day challenge” using F45 Training which is a 45-minute “functional” high-intensity circuit training that exercises his entire body with squatting, jumping, pushing, and kicking. He also said he basically gave up alcohol, including wine, for two months to help him get achieve his goals.

When 61-year-old actor J.K. Simmons suddenly appeared to be completely jacked, many assumed it was for his role in Justice League.

Turns out that it was because, as he put it, “After the second and final time that I got hugely fat in my life and when I lost that weight six or seven years ago, I pretty much decided that I was going to stay in decent shape for the rest of my life.”

Kevin Smith had a choice to make a couple of years ago. Get in shape or die. He chose to get in shape.

Why? He had just survived a massive “widow-maker” heart attack from a 100 percent blockage of his left anterior descendiny artery.

In the six months following that event, the 48-year-old actor and director lost 51 pounds.

Smith started losing weight when he switched to a plant-based, vegan diet from entertainer Penn Jillette’s book “Presto!: How I Made Over 100 Pounds Disappear and Other Magical Tales” and began using Weight Watchers.