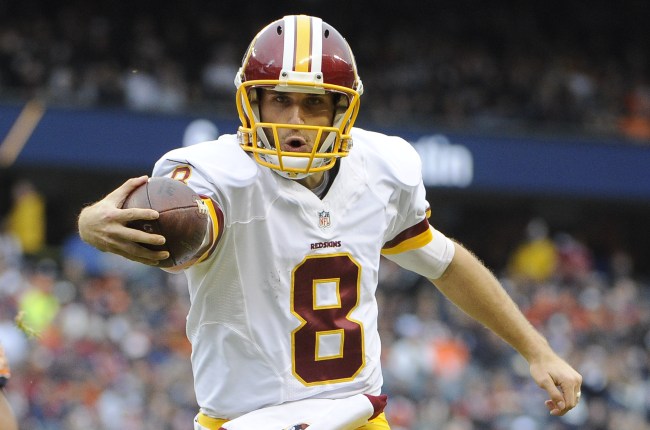 Kirk Cousins signed a massive contract with the Minnesota Vikings this off-season.

After spending two years with the Washington Redskins unable to work out a long-term deal, Kirk Cousins inked a 3-year $84 million FULLY GUARANTEED contract as quarterback for the Minnesota Vikings. At the time he signed the deal, Kirk Cousins became the highest-paid (per year) player in NFL history.

The NFL released a mini-documentary titled NFL Life | Kirk Cousins, Episode No. 1: The Path To Minnesota which is said to take us through Kirk’s spring as he narrows down the teams on his radar before ultimately deciding that Minnesota is where he’d take his talents.

In a clip on Vikings.com, we get to see the moments after Kirk Cousins signed his historic contract for $84 million and it’s pretty amazing but not for the reasons you’d normally expect.

READ NEXT: Kirk Cousins Revealed The Weird Mystery Meat He Was Grilling After Getting Called Out Online

The natural reaction after doing anything incredible in life is wanting to share it with your family and loved ones. Kirk’s immediate instinct was to call his family and celebrate signing the $84 million guaranteed contract but he wasn’t able to get ahold of anyone in his family.

Instead of waiting for someone to answer, Kirk Cousins did the next best thing and called an AAA employee whom he’d spoken to earlier in the day. You can watch the clip on the Vikings’ website, but Business Insider has it summarized like this:

Cousins instead turned to an AAA employee he’d spoken to earlier who asked Cousins where he was signing. The employee had told Cousins to “go get that money.”

“I wanted to call you and tell you that I did sign my contract today, as you instructed me to,” Cousins told the employee, James, on the phone.

“We signed with the Vikings. We got a favorable deal. I think both sides are happy with it,” Cousins said. James congratulated him.

Cousins later got in touch with his wife and family. (via)

After he signed with the Vikings, Kirk Cousins broke the news to his AAA agent because his family was busy 😂😂
(Via @Vikings) pic.twitter.com/MaOuW4Bt3z

Methinks the dude’s probably found his own place by now given that he’s just gotten paid more than most people can ever imagine:

Very intriguing behind the scenes look at Kirk Cousins off season. Guy lives in his in-laws basement, says he doesn't like the cold, signs with the Vikings and has no one to tell so he calls the guy at AAA. https://t.co/zh7L9tQFjs

This was all in Episode 1 of the Kirk Cousins documentary which you can check out on the Vikings’ website as we inch towards the start of the NFL regular season.

Will it be better than Hard Knocks? Most definitely not.

Will it be pretty enjoyable if you’re a Minnesota Vikings fan or an NFL fan who was rooting for Kirk Cousins to get a good deal? Probably.