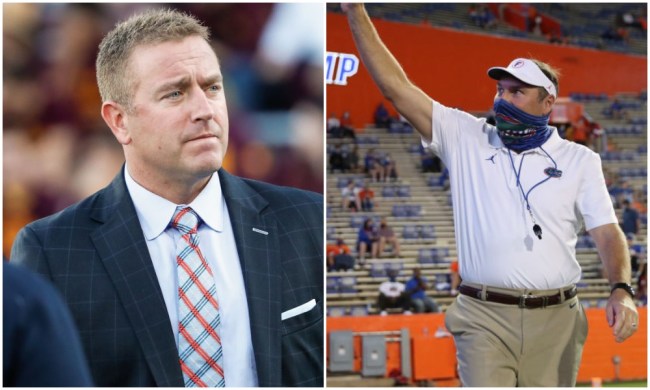 Dan Mullen is no stranger to inserting himself into the middle of situations on the football field. Two years ago, in what was his first season as Florida’s head coach, Mullen got into a fiery exchange with Vanderbilt head coach Derek Mason where he had to be held back on the sideline while screaming at Mason.

Given that happened just a short while ago, it wasn’t all that surprising to see Mullen out on the field during Florida’s fight with Missouri essentially throwing lighter fluid on an already raging inferno. Him coming out of the tunnel and pumping up the Gator fans inside The Swamp was quite the bold play as well.

SEC Network says Dan Mullen told them he was trying to get his team off the field. He went after a ref on the field, according to the tape. And then he did this after the field was cleared. pic.twitter.com/PPw1t8kJZy

The SEC didn’t seem to care too much about what Mullen did seeing as how the conference fined him $25,000, which is the same exact punishment Ole Miss head coach Lane Kiffin received for voicing frustrations with officials after the fact the SEC already admitted it had completely messed up.

The majority of college football fans that don’t live in Gainesville, FL were upset with Mullen’s antics and ESPN’s Kirk Herbstreit was pretty frustrated from what he saw from the 48-year-old man that gets paid millions to coach student-athletes.

“He’s got a competitive spirit about him,” Herbstreit said on the ‘CFB Podcast with Herbie, Pollack & Negandhi.’ “He did the same thing with Derek Mason and Vandy, was it last year or the year before when it was yelling back and forth kind of thing, so he gets into that competitive mode. The game was really close at this point, so maybe he was trying to spark his team. But that was uncalled for, you’re a leader of men. You cannot be the guy we’re trying to control. The players don’t need to be controlling the coach, that’s not what we’re looking for.”

Mullen and the Gators walked away with a 41-17 win over the Tigers on Saturday and now look ahead to their matchup with Georgia.