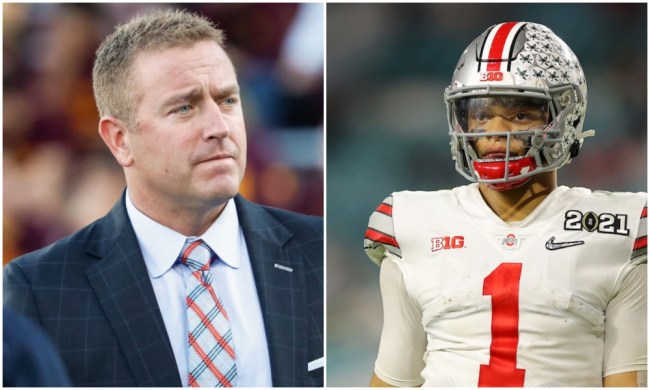 There seem to be two competing narratives when it comes to quarterback Justin Fields. One group of talking heads and NFL Draft analysts seem to be all-in on Fields, while others seem to be seeing red flags. You can put a lot of the blame on both Dan Orlovsky and Christ Mortensen for stirring the ‘maybe Fields isn’t all that good’ pot.

On top of having a stellar college career, Fields has put on not one, but two pro days to try and showcase his skill to NFL scouts. He has his eye on being the No. 2 quarterback selected behind Trevor Lawrence, but we’ll have to wait until April 29 to see how all of the pieces fall.

Fellow former Buckeye quarterback Kirk Herbstreit is sick of all of the negative comments and ‘what ifs’ being associated with Fields’ name and sounded off during a segment on SportsCenter with Scott Van Pelt in an attempt to silence all of the doubters out there.

“I oftentimes see anonymous sources attached to some of these criticisms or some of the analysis that you hear a lot about,” Herbstreit said, according to 247 Sports. “I know (third-year OSU head coach) Ryan Day really well. I knew Ryan Day when he had Dwayne Haskins (2016-18). And I know how Ryan Day felt about Dwayne Haskins’ ability. I know he felt he needed another year not just to come back and read defenses, just another year to mature and grow. And now, looking back at it, you can see why.

And I also know this year that he feels very strongly about the commitment and the leadership and the playmaking ability and just the overall package of what Justin Fields has to offer to the NFL. What you’re going to find with Justin Fields is a guy that’s going to show up now with a chip on his shoulder, has all (the intangibles) — are you kidding me? — 6-3, 224 pounds, runs a 4-4, can make every throw. Very, very tough to pass on the intangibles and the physical ability of what Justin Fields has to offer.”

Nobody is going to argue that the ceiling for Fields is unbelievably high or that he doesn’t possess impressive intangibles you want to see in a modern-day NFL quarterback. Herbstreit making a note about Haskins and him essentially turning into a bust is interesting, perhaps some of these rumors surrounding Fields stems from the downright horrid past when it comes to Ohio State quarterbacks being taken early in previous drafts.