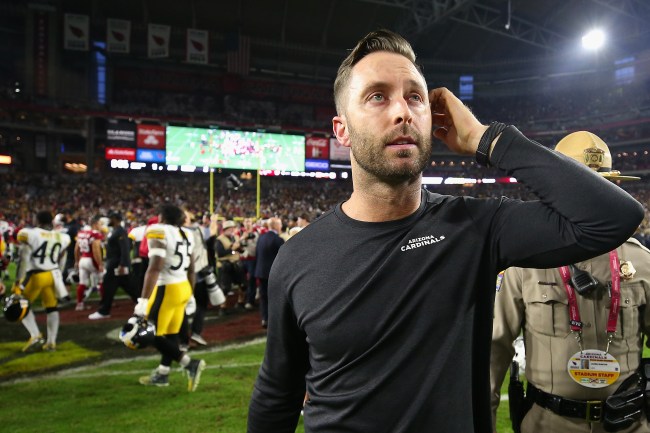 Kliff Kingsbury is the guy that pretty much every other man wants to be like. He’s a good looking dude — unless it’s in Madden — so he’s been known to get the ladies, has (somehow) risen from mediocre college football coach to NFL head coach in a matter of a few years, and was a former star college quarterback who helped make Air Raid offenses sexy. Maybe he’s just got some sort of deal with the devil, because most of it just doesn’t make sense.

Regardless of how Kingsbury got to where he is, there’s one thing he knows: He plays the role.

That’s not to say Kliff isn’t genuine, but, c’mon, he knows he’s got it like he does, and he’s never shy to rub it in everyone else’s face that life’s pretty damn great for him. We all witnessed that during this year’s virtual NFL Draft, when cameras showed Kliff Kingsbury lounging on his couch in what appeared to be a fucking multimillion dollar lair for a superhero. Take a look below.

Naturally, the pic of Kingsbury went viral, with everyone pretty much saying the same thing: The dude is flexing on his colleagues who were trapped in makeshift offices in the basement of their homes. Not the Arizona Cardinals’ head coach, who proved that living the trendy life fits him well.

But was the whole thing actually staged to play up Kingsbury’s persona? According to the head coach, it sure as hell was, because he told the NFL Network’s Good Morning Football that the whole thing was just a setup.

“Going into it I knew I was going to be super extra in the picture,” Kingsbury said. “I do think the fire — it was 100 degrees and sunny — was a bit much, but I laid four phones on the table because the NFL gave us a couple … all the screens, I just wanted to make it as extra as possible and it turned out good. It made for fun.

“The NFL only allowed us to have one person at the house or I might’ve had some people on the float swans in the back, or a DJ, really doing it big. There’s always next year, hopefully.”

This dude’s out here clowning, man, and somwhere Vince Lombardi’s rolling over in his grave — not out of spite, but because he wants what Kliff Kingsbury has. Hell, who wouldn’t want that set up; despite it all being overly staged.

Like I said earlier, Kingsbury’s legitimately the dude you worry about leaving around your girl, and he’s got a pretty sly humor about him that seemed to work well on the NFL Draft night. Now that he’s got DeAndre Hopkins at his disposal to pair with last year’s No. 1 overall pick Kyler Murray, maybe he’ll start having more fun on the field, too.