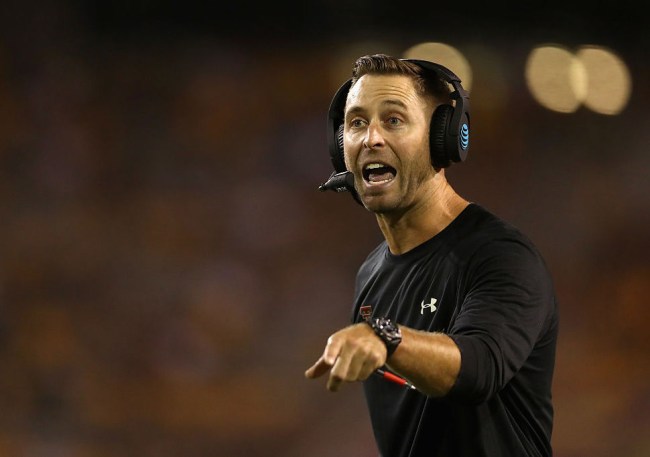 A couple of weeks ago, EA Sports decided it was time for the Madden 20 hype train to leave the station when it started rolling out information about the upcoming game, including the highest-rated teams and the full list of player scores for the upcoming installment.

It’s safe to say not everyone was thrilled with the announcement—especially a few players who weren’t ecstatic about their ratings, a list that included Antonio Brown and a couple of other guys who encouraged people to boycott the game until the justice they feel they deserve is served.

While EA is doing what it can to make things as realistic as possible, the company has appeared to miss that mark a bit based on some of the glitches we’ve seen and the questionable likeness of Greg Olsen, who looks nothing like he does in real life.

However, he’s not the only person whose portrayal seems a bit off.

On Tuesday, Arizona Cardinals coach Kliff Kingsbury aired his grievances to reporters after claiming EA missed the mark when it came to creating a virtual version of himself.

Here’s what he had to say according to USA Today:

“I had seen a bunch of guys kind of getting in their feelings about their ratings. And then, somebody sent me a picture of what I looked like on there. So I want to get adjusted on looks rating. I look like I’m on The Walking Dead in that picture.”

If you’re curious (which I assume you are), here’s what Kingsbury looks like in Madden 20.

Kliff Kingsbury says he looks like a character from The Walking Dead on Madden 20. I think that's a little harsh. pic.twitter.com/fXWwxOB5Um

Kliff Kingsbury on Madden 20. Could use more swag, but this is pretty solid. pic.twitter.com/vfUY3rAeYs

Olsen’s likeness might be an unmitigated disaster but I honestly don’t see what Kingsbury’s issue is here. Sure, Madden might not get a lot of stuff right but they seem to have done a pretty good job with this.

I’d argue the coach should be a bit more occupied with getting the Cardinals out of the basement of the NFL instead of his Madden likeness but I’m just a random person writing things on the internet so what do I know?