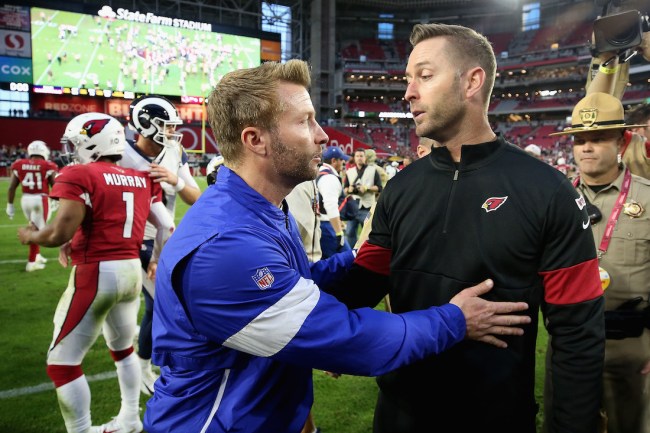 Arizona Cardinals head coach Kliff Kingsbury knows it takes work to really impress a woman. Whether it’s going super extra by showing off a sick bachelor pad — as he did during the 2020 NFL Draft — or previously using some serious charm to impress moms of recruits, the dude knows how to schmooze with the best of them.

But none of that compares to the apparent move Kingsbury pulled during a Week 17 contest during the 2019 NFL season, when his Cardinals were facing Sean McVay‘s Los Angeles Rams in L.A.

According to longtime NFL writer Peter Shrager, who joined Pat McAfee on Wednesday, Kliff Kingsbury didn’t just want to get some IG model into the game, but he wanted to give her a once-in-a-lifetime experience. That’s why he allegedly hit up McVay a few hours before the game started to try and get some field passes for the lady, hoping the added access would leave quite the impression. Take a look below for the story from Shrager.

It turns out it was for a European IG model Kingsbury had met & wanted to get her on the field before the game" 😂😂😂@PSchrags on his new podcast Flying Coach with McVay & Kliff #PatMcAfeeShowLIVE pic.twitter.com/PNb5kpqgiK

This is so epic it’s not even funny. And it’s so over-the-top that only a guy like Kingsbury could maneuver such a plot just to get a lady to like him. I mean, the dude is flashy AF, so this fits his profile beautifully.

But how about Sean McVay pulling some strings in order to play wingman for his buddy? Like, man, this is A+ stuff that deserves a bottle of rare whiskey or something as a thank you. Wonder whatever came of all this, and if the plan to impress the IG model led to anything more?

Kudos to Kliff Kingsbury for using his connections to make a lady happy. He could’ve easily just gotten the woman tickets in the nosebleeds or, given his job title, probably a suite at the game. Instead, he made sure she got the full experience by bringing her down on the field. And you thought chivalry was dead.