Would You Be Shocked To Hear A Knicks Fan Got Escorted Out Of MSG For Wearing A ‘Ban Dolan’ Shirt, Or Nah? 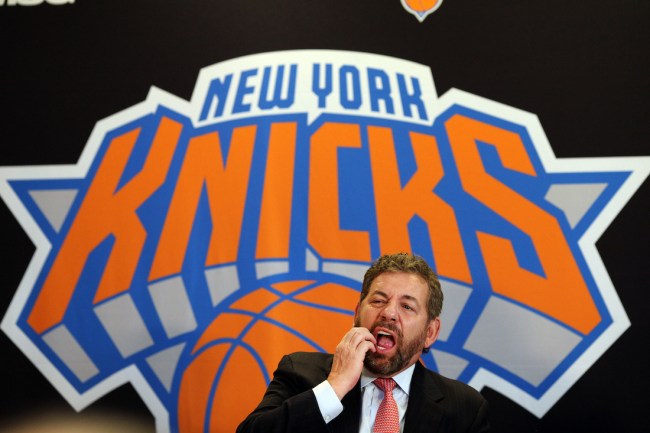 Being a Knicks fan has to feel like being kicked in the balls without any warning at all. Like, just when you’re excited about the team being relevant again for the first time in about a decade — and are a legit playoff team in the Eastern Conference — the owner of the franchise, James Dolan, reminds you that the entire organization is a joke.

While we saw an incident a couple weeks ago involving Knicks legend Patrick Ewing feeling a bit disrespected while at Madison Square Garden, now a random Knicks fan is out here being escorted out — all for wearing a self-expressive shirt that simply read “Ban Dolan”. As you might imagine, ol’ James Dolan didn’t find it too humorous.

According to the New York Post, a Twitter user with the handle @djnessnyc published a video on social media showing him talking with MSG security about the shirt he had on. The entire conversation is laughable, with one of the security guards telling the fan that the “policy is, and will continue to be, that if you are disrespectful to anyone in our venues we will ask you to leave.” The guard also added that, “in this arena, this would be offensive information. We’re asking you kindly if you would like to cover it up, and we’re offering you a free shirt to do so.” Take a look at the interaction below.

Just got kicked & escorted out of the Knicks game @TheGarden for wearing a t-shirt by the homie @fwmj 😩 that apparently James Dolan didn't like?! These tickets were too expensive fam to just get bounced 5 mins into the game with no refund?! How does this work @NBA ?! pic.twitter.com/RiSE3tjIHy

Staff & I were cordial to 1 another the entire time. Bar staff was dope too. No one ever got belligerent with anyone. What for?! But to not get a warning that politely refusing to put on a random shirt would result in ejection is wild OD. Let me at least wear my coat fam 😩

Even after the Knicks fan pleads with security about it being his birthday — which, shout-out to the guards for at least wishing him a happy day — the fan was still being scolded over his shirt. While there’s no proof that James Dolan was responsible for getting the fan removed, it’s hard to declare it isn’t at least a possibility.

A couple of years ago, another Knicks fan had a run-in with the billionaire owner, and was threatened by Dolan at Madison Square Garden, suggesting that the outspoken fan would be banned from the arena for life. See the video below.

James Dolan is an absolute, insecure lunatic. If that gets me banned from ever stepping foot inside Madison Square Garden, so be it. Even living in New York City — where the media’s the harshest on earth and people are supposed to have thick skin — the guy cries like a baby anytime a Knicks fan talks bad about his piss-poor ownership. And this latest incident is the most recent example of the entire franchise being a joke.