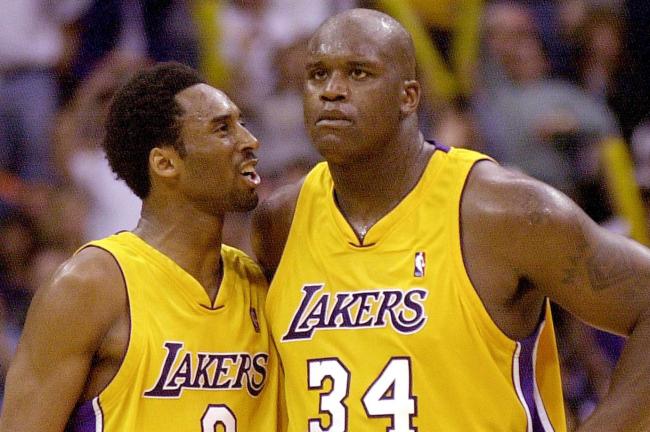 Kobe Bryant and Shaquille O’Neal played together on the Lakers for eight seasons, and over the course of their time as teammates, they helped lead Los Angeles to the NBA Finals four times—including three consecutive years where they managed to secure the Larry O’Brien Championship Trophy.

Of course, when you have two of the best players in the game on the same team, you run the risk of them butting the giant heads they have as a result of their inflated egos, and it’s not exactly a secret that the duo never exactly saw eye to eye. Prior to his tragic passing earlier this year, Bryant claimed he could’ve won twelve championships if the man he once got into a fistfight with at practice had even a modicum of the guard’s famed work ethic, while O’Neal revealed he once offered J.R. Rider $10,000 to return the favor due to their beef.

Things ultimately fell apart when the Lakers sent their star center to the Heat following the team’s loss to the Pistons in the Finals in 2004, where Shaq was roundly criticized for his underwhelming performance during the series. While some members of the front office claimed the trade was made due to O’Neal’s unreasonable contract demands, it was fairly evident the move was also an attempt to appease Bryant, who had previously entertained the thought of joining Michael Jordan on the Wizards thanks to their feud.

During a recent appearance on the Pro Basketball Talk podcast, Jeff Pearlman—who chronicled what went down in Los Angeles back in the day in his book Three-Ring Circus: Kobe, Shaq, Phil, and the Crazy Years of the Lakers Dynasty—shared another anecdote about Bryant threatening to defect to the Clippers if he was forced to continue to play with “that motherfucker” O’Neal:

Kareem Rush told me after the Lakers lost to the Pistons in Game 5 [of the Finals] and that series ended, they had a team function. Kareem Rush was Kobe’s backup, and he’s sitting there at this restaurant, and Kobe walks in and says, ‘I’m never playing with that MFer again,’ talking about Shaq. So when Kobe re-signs, he was asked at a press conference did Shaq leaving had anything to do with you being here, he said ‘No, not at all’ and, I’m not speaking ill of the dead to say it wasn’t true. He was not coming back, he was going to be a Clipper.”

Pearlman added that then-owner Jerry Buss couldn’t stomach the idea of Bryant donning the uniform of the team the Lakers share an arena with, which undoubtedly played a role in his decision to ship Shaq to Miami, where he’d manage to win his final championship—although when you consider Kobe eventually added two more to his résumé before stepping away from the game, he might’ve gotten the last laugh.