Jeanie Buss Shares Moving Tribute To Kobe Bryant: ‘My Father Loved You Like A Son, Which Makes Us Family’ 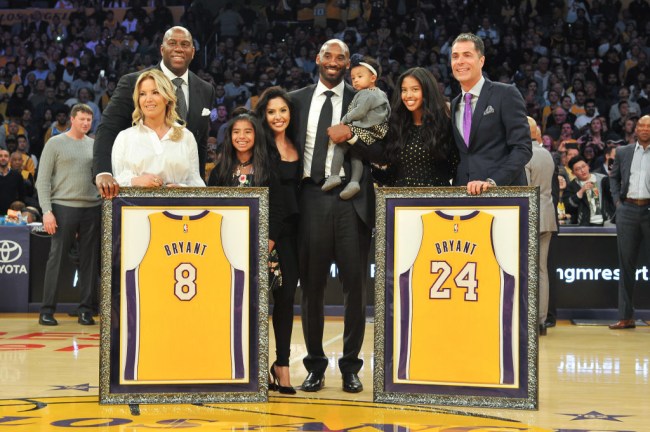 Los Angeles Lakers controlling owner and president Jeanie Buss broke her silence on the tragic death of Kobe Bryant. Buss shared a heartwarming story of how Kobe and his daughter Gianna helped her grieve when her father died.

In an Instagram post, Jeanie Buss attempted to explain how important Kobe Bryant was to the Lakers family as well as her own family. The tribute featured a photo of Jeanie with Kobe and his family at the 2016 NBA All-Star game in Toronto.

“Kobe, I don’t know how to express what you mean to me, my family and the Los Angeles Lakers,” Buss wrote in the touching tribute. “My father loved you like a son, which makes us family.”

Buss shared a story of how she was reeling over the death of her father, Dr. Jerry Buss, after he died on February 18, 2013, at the age of 80. In 1979, Jerry Buss purchased the Lakers as well as the Los Angeles Kings NHL team, the Great Western Forum, and a 13,000-acre ranch in the Sierra Nevada Mountains, all for $67.5 million in one major deal.

“When you invited me to lunch shortly after my father passed away, I was struggling to find motivation and purpose,” Jeanie wrote. “Kobe, you brought Gianna with you to spend some time with me. You explained that you wanted to show her that women can be leaders in the NBA, just like the men.”

“At first, it seemed like an action of a devoted father setting an example for his daughter,” the Lakers majority owner said. “But in actuality – and I am positively sure you knew EXACTLY what you were doing – what you did was give me the inspiration and strength I was searching for. I reflect on that day often and it makes me smile and it makes me strong. I call on that memory whenever I feel down and need a bit of courage.”

“For everything you did on the court that filled me with so much joy and love, for all the lives you changed through basketball itself, it was that day with Gigi that reignited my drive and determination,” Buss revealed.

“Vanessa, Natalia, Bianka, and Capri – I am so sorry for your loss,” she said to Kobe’s family. “We are grateful to have you in our lives and we will always be here for you.”

“To the families that also lost loved ones on Sunday, the entire Laker family mourns with you,” Buss added. “Laker Nation – we are one family grieving the loss of people we all loved dearly. We will mourn together, cry together but we will also heal together, love together and win TOGETHER. We love you.”

“Kobe – that’s what you made you so unbelievably special. You not only inspired us towards greatness, you showed us the way.”

Buss ended the homage to the Los Angeles Lakers legend by saying: “To learn more about how you can help the families affected by this tragedy go to MambaOnThree.org and to further Kobe and Gianna’s legacy in youth sports visit MambaSportsFoundation.org.”

In 2011, Jeanie Buss talked about the first time she met Kobe Bryant back in 1996 when he was drafted with the 8th pick in the NBA Draft by the Los Angeles Lakers.