Kris Bryant Explains The Seemingly Unexplainable: Why He Signed With The Rockies 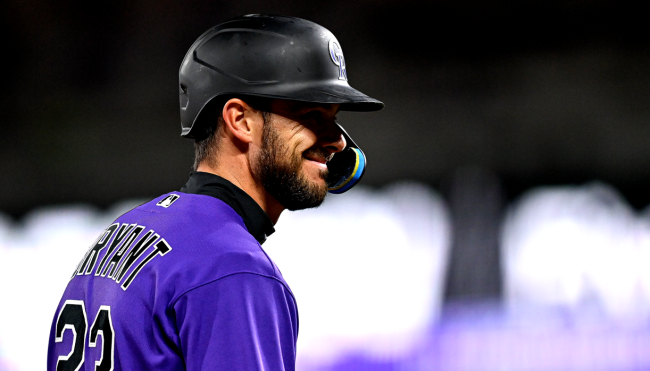 One thing Kris Bryant can certainly never be called after signing a seven year, $182 million contract with the Colorado Rockies is a “ring chaser.”

The 2016 National League Most Valuable Player basically could have signed with just about any team during the past offseason. Many teams who are expected to contend for a World Series title were desperately hoping he would play for them.

Bryant would have been a huge addition to a team like the Chicago White Sox. He might have been the missing piece in San Diego. Imagine him teaming up with his buddy from Las Vegas, Bryce Harper, in Philly. But, the Rockies? The same team that has gone 171-212 over the past three seasons and had just two winning seasons in the past 11 years? Does he not care about winning anymore?

“I found all that stuff absolutely hilarious,” Bryant told The Athletic last Friday. “One, because I have won a World Series. I’m not one of those guys in the NBA that has to go to a super team to chase a ring.”

He says the decision to go play for Colorado was a joint one between him and his wife.

“We were talking to teams that may have been better ‘on paper,’” Bryant said. “But I’ve seen so many guys want to chase the ring or sign free-agent deals with so-called contenders and they’ve yet to make the playoffs. So to me, it’s not guaranteed.”

So it was the money, right? $182 million is nothing to sneeze at, of course. Not completely, according to Bryant.

“I’m all for a good story and I’m all for re-writing history,” Bryant said. “We did that in Chicago. Nobody expected the Cubs to win in 2015. We were still the lovable losers and we changed the culture there. Now they’re expected to win and I want to do the same here.”

Being from the aforementioned Las Vegas also played a part in his decision.

“I love snow, I love good summers and when leaves change colors,” Bryant said. “So I loved Denver and Salt Lake. This was in high school, it was before I knew I was going to be a good baseball player. It’s weird how this became an opportunity for me. I was like, ‘I’ll jump all over that, I love this city.’”

There was also the fact that he can play in Colorado and be practically invisible to the national media, unlike in Chicago. That and the fact that with the Rockies he has more say in what the team is planning.

“Something I wanted in free agency, I wanted to let teams know that, hey, I want to be more involved,” Bryant said. “I want to hear who we’re going after, I want to talk about what needs to be better. I never had that (in Chicago). Mainly because I was a younger guy. And towards the end there, we didn’t know if I was going to be there, so why include me in that stuff. But I have a lot of wisdom and things to offer. Experiences I’ve been through that kind of go unmatched, especially in Chicago and being the No. 2 overall pick. It was a team that hadn’t won in so long, so I’ve learned a lot and have stuff to offer. I want (Colorado) to take advantage of everything I have to offer. Not just move around the field and play baseball, but stuff off the field too.

“I don’t want my opinion to be the end-all, be-all. I just want you to hear what I have to say about how I perceive where we’re at and what we can use. I just want to offer that up and it wasn’t that readily available (in Chicago).”

Sounds like Bryant signing in Colorado was actually a no-brainer. At least to him.