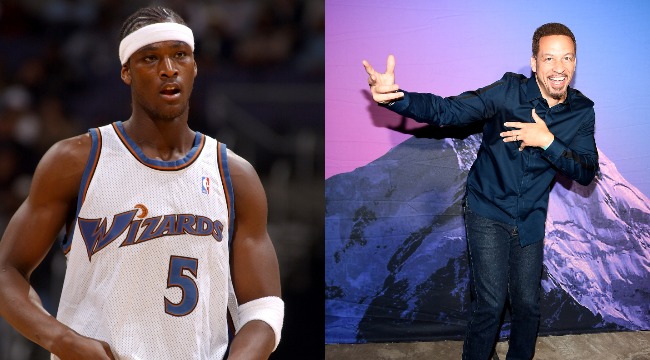 Stop me if you’ve heard this before but Kwame Brown has come for the neck of a public figure who dared say his name, regardless of the context.

The 39-year-old former number 1 pick took aim at Chris Broussard and Rob Parker after the sports commentators did little more than review the week-long saga that has plastered Kwame Brown’s name on every sports media publication in existence.

In the 8-minute segment, Broussard appeared to actually defend Kwame, claiming that being under the iron fist of Michael Jordan and Kobe Bryant is a tall order for any young player, while also dubbing Kwame a “serviceable NBA player” even if he didn’t meet the astronomical expectations of a number 1 pick.

“Kwame Brown has been so beaten down. He has been the poster boy for #1 pick bust. Of course, as a #1 pick, he didn’t live up to his billing by any stretch of the imagination. But he became a serviceable NBA player.

Players told me Kwame, that boy is country strong. I don’t think dudes want to mess with him. He was viewed as a tough dude, at least that’s what players told me…And to be honest that 2001 Draft when he was #1, you had a lot of dudes that didn’t pan out at the top of that draft.”

In a 7-minute response video titled ‘Chris ya’ll can dish but can’t take it,’ Brown chastised primarily Broussard for being a mouthpiece to his “white zaddies” in sports media, furthering the narrative that black men are

“You guys have been f*cking with people’s momma’s sons long enough. You’re not going to make this about Kwame Brown. This going to be about all these black guys who bust they ass, and ya’ll doing the bidding of your white zaddies. Because as soon as they get into any type of allegations, you guys run it on a cycle all day.”

Brown then brings up the perceived over-exposure of the Deshaun Watson allegations and the widespread mockery of Carmelo Anthony and Cam Newton the second their games begin to decline.

“Rob, you do have a big ass nose and you are ugly.”

When the rabbit got the gun, it ain’t no fun.

Who’s next? Feed Kwame the rock.