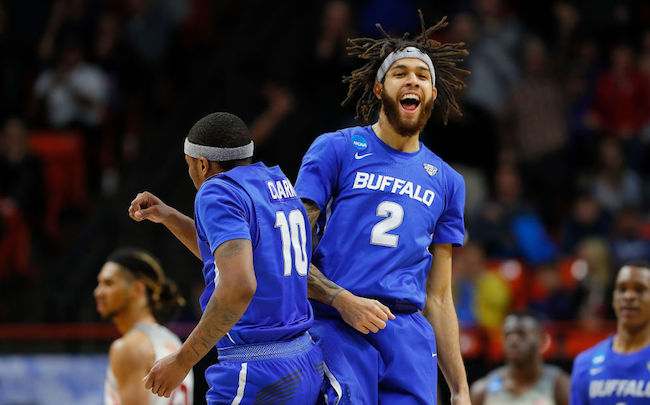 The first day of the NCAA Tournament was filled with the madness we’re promised when March rolls around every year. The 11th-seeded Loyola broke the hearts and spirits of the Miami Hurricanes by drilling a three at the buzzer for the upset, but bracket-busting season didn’t officially kick off until later in the day when the 13th-seeded University of Buffalo absolutely dominated Arizona on their way to an 89-68 victory over the Wildcats.

Over the past few years, the people of Buffalo have gained a well-earned reputation for their ability to use the city’s sports teams as an excuse to do hilariously some stupid shit, which largely centers around coming up with creative ways to demolish folding tables in the parking lot at Bills games (with some fans having much more success than others). It’s unlikely Bulls Mafia will ever reach the status Bills Mafia has already ascended to, but one guy did what he could after the game last night to celebrate the only way Buffalo knows how.

After the final buzzer, UB fan Kyle Hughes— who had a brief moment of internet fame a few weeks ago when he sunk a half-court shot at a Bulls game and reacted like he’d won free tuition instead of the 12 pizzas he actually received— posted a video of him celebrating by jumping through a table he’d set up outside on the school’s snow-covered campus.

I can only imagine how anxious the rest of the folding tables in the city must feel right now as they prepare for Buffalo’s game against Kentucky tomorrow night.