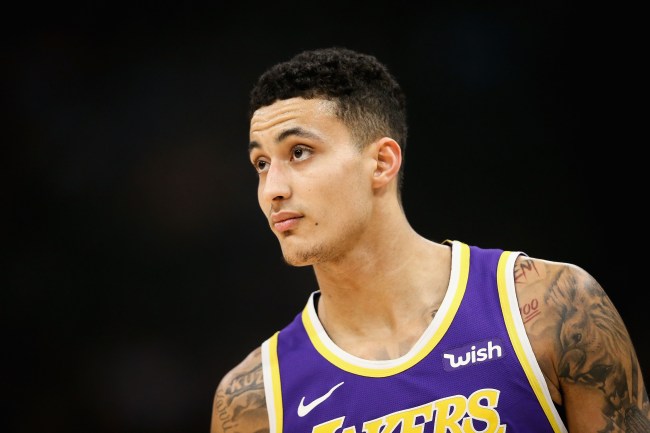 Kyle Kuzma might want to hit the ol’ delete button on a tweet he sent out last night during Game 6 of the NBA Finals between the Golden State Warriors and Toronto Raptors. The young player might also want to hope that the basketball gods don’t punish him for being so insensitive about a fellow player, because he’s setting himself up for some pretty bad karma — and the social media people made sure they ripped Kyle Kuzma a new one for what he said.

Following the devastating knee injury to Warriors star Klay Thompson — which ended up being a torn ACL — Kuzma voiced his opinion, saying that it was karma for what happened in 2017 to Kawhi Leonard against the Warriors in the Western Conference Finals. For those who forgot, Leonard, then playing for the San Antonio Spurs, came down on Zaza Pachulia’s leg after the big man impeded the All-Star’s ability to land during a jump shot. At the time of the dirty play, the Spurs were blowing out the Warriors, and Leonard ended up missing the rest of the series; one in which they lost. Take a look at the play below.

Anyway, back to Kyle Kuzma and last night. Here’s what he tweeted after seeing Klay Thompson go down, which, as mentioned, became a serious knee injury that could cost the All-Star most of next season — one in which will be his first after a new contract this summer as a free agent.

This was karma from the spurs series when kawhi got hurt vs the warriors. Sucks to say.

To his credit, Kuzma did send a tweet in support of Thompson after hearing the news of the severity of the injury. Unfortunately, the damage was already done at that point.

This is such a bad look for Kuzma. Not only does he sound like a prick to an NBA brother, but, as mentioned earlier, he’s literally tempting the basketball gods to get him back at some point. With the young Lakers player believed to be the main factor in a trade with the Pelicans to acquire Anthony Davis, some people on Twitter hopes the guy ends up in New Orleans. Others blatantly just called him out for being so insensitive. Take a look below at some of the tweets people sent out.

Holy shit for a player to say this, knowing injuries could happen at anytime to anyone. Smh

Have fun getting traded my man

Considering Kyle Kuzma and the Lakers spent this year in absolute misery and dysfunction — missing the playoffs again during a tumultuous season — it probably would’ve been better for Kuzma to just let his phone sit by his side without tweeting a damn thing. Hey, the dude’s young, here’s to hoping he learns from this, because it’s dumb.