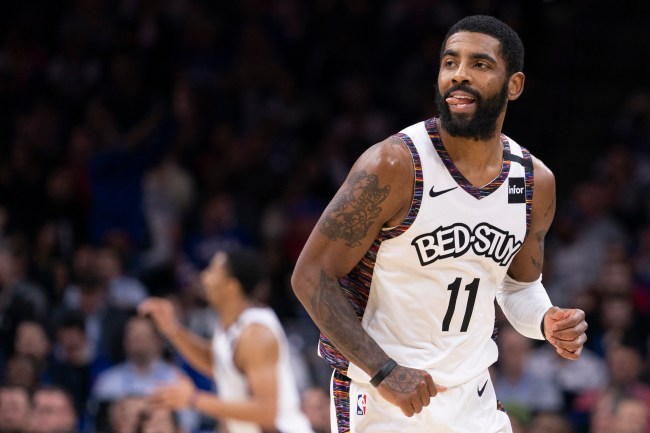 Kyrie Irving is one of the greatest talents that the NBA has today, and he’s accomplished a helluva lot since being selected No. 1 overall in the 2011 NBA Draft. Oh, and have no doubt, Kyrie will let everyone know about how great he’s been — namely, winning a title in 2016 with the Cleveland Cavs, where Irving knocked down the game-winning three. Ah, yes, Kyrie loves himself some Kyrie.

While Irving’s confidence sure is commendable, unfortunately, it doesn’t come with a whole lot of basis. He’s unreal individually, but the cold hard truth is this: he’s been a pretty crappy teammate wherever he’s played in the NBA. He forced his way out of Cleveland. He struggled to ever mesh with the Boston Celtics. And when he had the chance to handpick his next franchise, the Brooklyn Nets, he’s failed to lead a young team with high expectations, as they’ve actually performed better without the All-Star point guard than with him.

This all led to quite the exchange the other night, when Kyrie Irving threw some of his teammates under the bus to the media following a loss to the Philadelphia 76ers. It caused outrage — and an epic rant from ESPN’s Stephen A. Smith — which now has Irving defending himself to those questioning his leadership abilities.

Following a recent practice, Irving was asked about being a leader — which resulted in a slew of emotions. Take a look below at what Kyrie had to say.

"It's not like I'm an ass—- yelling at everybody in the freaking locker room all the time … If it's harsh as a leader or it's too much for anybody, you're not in our locker room—stay the f— out." pic.twitter.com/peVcXQgsun

There’s a lot there, so here’s the meat of Irving’s explanation to the media.

“I’ve earned that respect, in terms of how great I am as a player. And there are still more goals that I want to accomplish in this league and I can’t do it without improving an organization and winning a championship and that’s what it comes down to.

The fact that Kyrie Irving stated how great he is as a player is all you need to know about his leadership abilities. Again, he’s more talented than most on the floor and always gets his, but pushing his weight around the locker room because he’s “great” doesn’t make him a leader — and it’s sad he even thinks that’s the way to earn the respect of his teammates.

ESPN does report that Irving talked to some of those teammates he threw under the bus, but, after seeing him sort of lose it in the above video, can anyone in the locker room really take this guy as a true leader? It’d be pretty difficult given how flustered he got with one simple question.