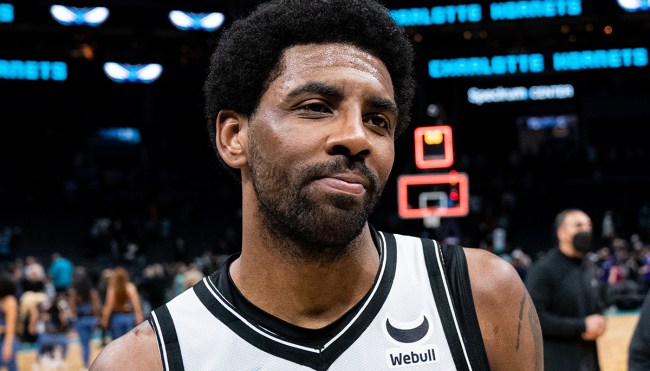 It’s been a little over a week since the most recent round of rumors began to swirl concerning the newest batch of trouble that seemed to be brewing in Brooklyn courtesy of Kyrie Irving, who had reportedly caught the eye of a number of NBA teams interested in making a trade for the guard who seems to be surrounded in a cloud of controversy in the same way dirt constantly swirls around Charlie Brown’s friend Pigpen.

Irving didn’t do much to squash the speculation he was looking for a new home earlier this week, and a report claiming the Nets had given him permission to seek a trade made it seem like it was only a matter of time until he took his talents elsewhere.

Things subsequently took a very interesting turn on Monday night when we learned Irving had decided to exercise his option with the team, which was fairly surprising until you consider he had 37 million very good reasons to do so as opposed to the $6 million he would’ve likely had to settle for if a rumored sign-and-trade with the Lakers had come to fruition.

However, it didn’t take long for the focus to shift to the incredibly on-brand statement Irving shared with Shams Charania after the news broke where the self-proclaimed leader compared “those who dare to be different” (presumably a reference to himself) to the “normal people” who merely “keep the world going.”

Kyrie Irving: “Normal people keep the world going, but those who dare to be different lead us into tomorrow. I’ve made my decision to opt in. See you in the fall. A11even.” https://t.co/rpiS8YkSZI

Those words didn’t come as a huge shock when you consider Irving has a long history of saying things that sound like that person you knew in college who had their third eye opened with the help of too many mushroom trips and YouTube videos about conspiracy theories—and it didn’t take NBA fans too long to seize on the chance to take advantage of a hot new meme.

"Normal people keep the world going, but those who dare to be different lead us into tomorrow" – me, about to order two appetizers as an entree

SERVER: Would you like to hear about our specials?

KYRIE IRVING: [arching one eyebrow] And these dishes are special according to whom?

KYRIE: Normal people keep the world going, but those who dare to be different lead us into tomorrow.

JVG: Who decides what counts as normal people? Can Adam Silver rule on this?

JAX: I've had abnormal teammates in my life, let me tell you.

"Normal people keep the world going, but those who dare to be different lead us into tomorrow" pic.twitter.com/iw4KYGmMsz

Normal people keep the world going, but those who dare to be different lead as there's a drive into deep left field by Castellanos and that'll be a home run. And so that'll make it a 4-0 ballgame. I don't know if I'm going to be putting on this headset again. I don't know if it'