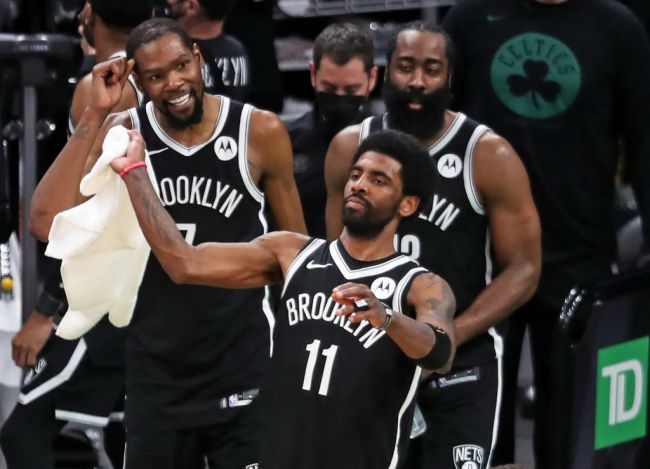 This is becoming either the longest-running Punk’d bit or Kyrie Irving really is a Contrarian Without A Cause.

After the (reportedly “disgusted“) Brooklyn Nets backed Irving into a corner by announcing that the organization will not let their seven-time NBA All Star point guard play or practice until he is eligible to become a full participant, multiple sources have told The Athletic Kyrie’s crusade is becoming increasingly esoteric.

The man is not even anto-vaxx, he’s just anti-unemployment?

“Multiple sources with direct knowledge of Irving’s decision have told The Athletic that Irving is not anti-vaccine and that his stance is that he is upset that people are losing their jobs due to vaccine mandates. It’s a stance that Irving has explained to close teammates. To him, this is about a grander fight than the one on the court and Irving is challenging a perceived control of society and people’s livelihood, according to sources with knowledge of Irving’s mindset. It is a decision that he believes he is capable to make given his current life dynamics. “Kyrie wants to be a voice for the voiceless,” one source said.”

There are no solutions, just trade offs.

Kyrie has no concept of this, and in his mind, the fight against Big Brother is a worthier cause than stomping out a disease that has killed 700,000 Americans despite widely available vaccines. And if he doesn’t believe vaccination mandates are the best course of action and he really wants to be a “voice for the voiceless,” maybe he shouldn’t play coy at every turn, banging the tired “private decision” drum when he grants the world a rare glimpse into his master plan.

If getting the shot isn’t the issue, why wouldn’t Kyrie play this season and donate all of his $33.3 million salary to a fund set up for those who have lost their jobs due to mandates? Wouldn’t that make a tangible impact, eliminate drama he so fiercely wants to avoid, and not screw over an organization who took a shot on him? Just spitballin’.

Can one of Kyrie’s supporters help me see the light, if there are any supporters left who know what they’re supporting?