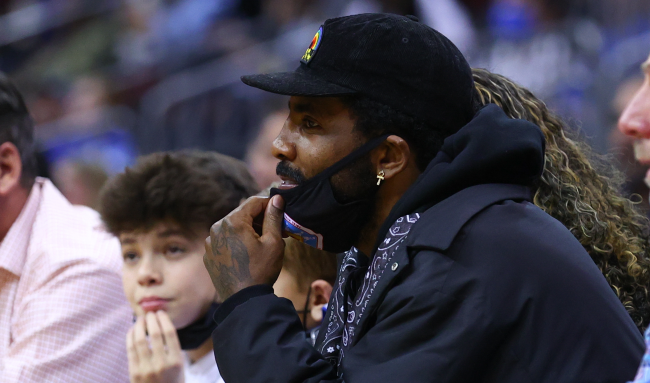 Back in October, Brooklyn Nets point guard Kyrie Irving claimed the reason why he isn’t following the required protocols of the NBA and the state of New York is because he wants to be a “voice for the voiceless.”

Irving supposedly refused the jab because he was upset that people have been losing their jobs due to various mandates. So rather than get it, he’s been sitting out and hasn’t been able to play or practice with his team this entire season.

Not many NBA fans, at least those who could actually understand what Irving was trying to say, believed him at the time.

Fast forward two months later and Kyrie Irving still hasn’t played a minute for the Brooklyn Nets this season, and a new report by Bally Sports is going to make even less NBA fans buy into what Uncle Drew is selling.

According to Bally, Irving lied about the real reason why he has yet to become vaccinated so he can participate in the 2021-22 NBA season.

Among Irving’s circle, the general consensus is that he is not anti-vaccination and believes everyone has the right to make their own decision. His apprehension about the COVID vaccine stems from his concerns about the possibility of long-term side effects, which, according to the Centers for Disease Control and Prevention, are “extremely unlikely.”

Those closest to him also have shared that Irving knows anything he says will be magnified and scrutinized and he doesn’t want to be viewed as an anti-vaxxer. He’s not taking this stance to be a voice for the voiceless. He’s just not trusting of the available vaccines, according to sources.

Irving also does not want to get vaccinated because of bad experiences with his health due to basketball injuries over the years.

Kyrie, who turns 30 in March and is still getting paid for all of the Nets’ road games, reportedly hasn’t just been sitting around during his extended time off. He reportedly has been regularly working out, focusing on cardio, weight training and meditation.

“This is the happiest that I’ve seen Kyrie in years,” a source told Bally Sports.

The same can probably not be said for those in the Brooklyn Nets’ front office.