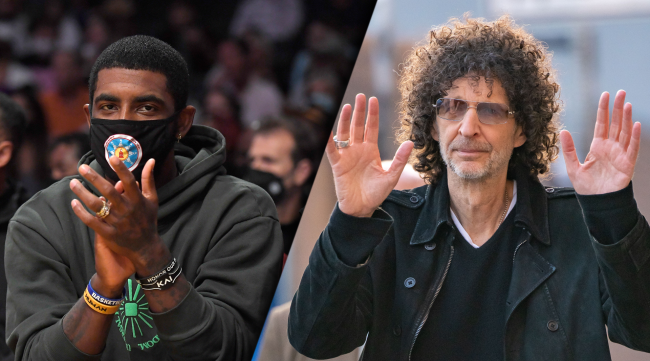 Brooklyn Nets star Kyrie Irving is no stranger to controversy or doing things that confuse and/or anger people.

Among the many odd statements that Irving has made over the past few years include a proposal to start a new basketball league, Kyrie comparing himself to Julius Erving, a rant about how he doesn’t want to be a celebrity (while also doing commercials), as well as numerous diatribes on social media.

Now, Irving is missing games and costing himself untold thousands of dollars because he refuses to get the COVID vaccine. And the reason why doesn’t make a whole lot of sense.

“I’m on both sides of all this. I support and respect everybody’s decision.”

Many questioned Irving’s vaccine stance, wondering if he is on “both sides of all this” then why exactly isn’t he playing?

Kyrie said he stands with the vaccinated and the unvaccinated, no more division we have to come together.

That literally means nothing.

Among those people are New York-based talk show host Howard Stern who went hard after Kyrie on his SiriusXM show.

“Talk about stupid, there’s some people who are willing to walk away from millions of dollars and not get vaccinated. They’re so stupid they’re putting their mouth where their money is,” Stern began his rant.

“He’s my favorite dude who’s putting his money where his mouth is,” added Stern, talking about Irving. “In terms of idiots, he’s got to be the top idiot in the country right now.

“Guy’s got a chance as a young man to make millions of dollars, all he’s got to do is get vaccinated, but he doesn’t want to get vaccinated.”

Stern then brought up another famous take Irving had back in 2018.

“This guy’s got a history of being stupid,” Stern answered. “He’s one of those guys who is a flat-earther too. And he doesn’t know anything, his mind works in a very strange way. He says, ‘I can’t figure out gravity, so it doesn’t exist.’”

Related: Kyrie Irving, Who Thinks The Earth Is Flat, Also Questions Whether Dinosaurs Ever Existed

“I don’t know who runs the Nets, but I wish they were running the country,” Stern added, talking about the team’s decision to sideline Irving until he gets the shot. “I love this. Basically saying, ‘listen douchebag, you’ve got to do what is right.’”

Howard Stern destroys “flat-earther” Kyrie Irving for refusing to get vaccinated, calls him the “top idiot in the country”. pic.twitter.com/gKjUhOykEV

Irving, who is scheduled to earn $34 million this season, will lose half of his salary if he remains unvaccinated because he is ineligible to play in half of the Nets games due to New York City’s indoor vaccine mandate.