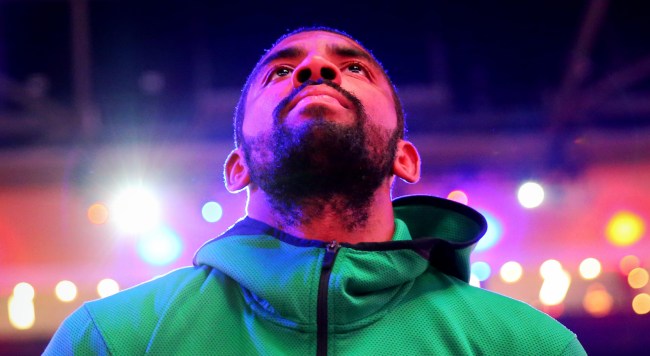 Have I mentioned recently just how much I love the NBA? Oh, right, I did. The competition. The intrigue. The drama. And that’s just off the court.

Speaking of off court drama, one of the most prolific pot-stirrers in the NBA, Kyrie Irving (who is totally going to play for the Knicks next season), has become the subject of a new NBA conspiracy theory.

Irving being tied to a conspiracy theories is nothing new, but this latest bit of conjecture might be the one to beat them all.

According to a NBA Reddit user named Broberg11, the reason for Irving’s bizarre behavior over the past year or so is because he is in… a new age alien cult?

“Hey folks, remember a week ago when Kyrie made this very….interesting post on his IG? Well something caught my attention about the wording of that post,” he wrote.

He is referring to the social media posts Irving made last week which were filled with all sorts of jibberish.

“I did a little digging re the “AGE OF NO MORE SECRETS…” line and i found a book written by this woman, Patricia Cori,” he continued. “In my relatively light observations, she appears to be a prominent figure in the Sirian Starseed movement, a new age cult that preaches the following; that a small group of humans are ancient aliens from the sirius star system who predate modern humanity (some examples include Jesus and Mary) and their purpose is to spread love and brotherhood, eventually transcending humanity and returning to the stars.”

So… that explains… this? Maybe?

“Might explain some of the more Hotepy flat earth stuff, or he’s really going deep on the troll sh*t, or I’m bored and reaching, IDK,” he concluded.

Nono, you’re not reaching, Broberg11. I think you might be on to something here.

Remember how Kyrie cited the wackjob cult leader from that Netflix documentary Wild Wild Country as one of his influences?

So I just started watching Wild Wild Country on Netflix and it reminded me of something, uh, notable Kyrie Irving told me in 2016: pic.twitter.com/aSmZJrVsfy

Plus, how else do explain the caption on this Instagram post Irving made on Wednesday? Note the emojis.

“Stroll with me Light Family! Home is where the heart lives and stays! 🔺👋🏾👁,” he wrote.

Marijuana in Mass. should come with warnings about psychosis, group says https://t.co/j1X9MuFbNu