Kyrie Irving Delivers Apology For Saying The Earth Is Flat, Explains Where He Was Coming From 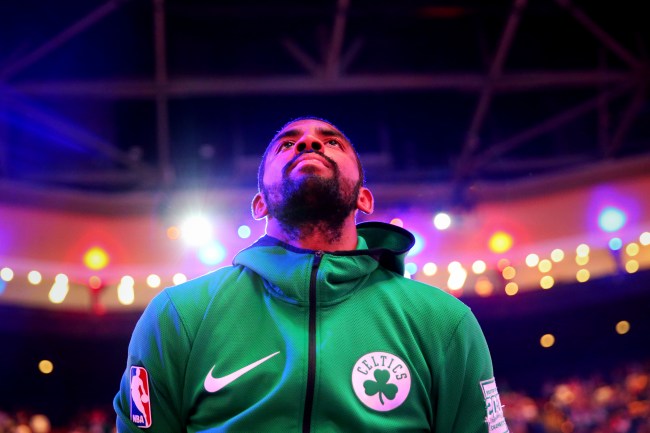 Kyrie Irving has a bright 2018/2019 NBA season ahead of him right now. The Boston Celtics are the favorites to win the Eastern Conference and they’re 6/1 to win the NBA Finals.

Regardless of Kyrie Irving‘s success on the court this season, or in any season, one thing will that will always plague him throughout his career is how he once went all in on claiming the earth is flat. We KNOW for a fact the earth isn’t flat. We have thousands and thousands of ways to verify this. The earth being round is fact, not conjecture.

Kyrie Irving wasn’t having any of that for a while but it appears as if he’s come to his senses and he’s finally trying to apologize to the world for the far-reaching consequences of a young celebrity with a huge fanbase saying the earth is flat.

Earlier this week, Kyrie Irving was a speaker at the Forbes Under 30 Summit where he apologized for his comments about the earth being flat. Interestingly, he stopped short of saying outright the ‘earth is not flat’ which is ultimately what people want to hear him say, but he here’s his apology for trolling because he was big into conspiracy theories at the time, or so he says.

Kyrie apologizes for saying the world is flat. #Under30Summit pic.twitter.com/uJH3fNbPqS

If you’d rather read his response than watch a video, here’s a transcript of what Kyrie Irving had to say in his apology:

“What you say, what you do, and how you mean it — at the time, I was huge into conspiracies. Everybody’s been there. Everybody’s been there like, ‘Whoa! What’s going on with our world?!” … At the time, you’re like innocent in it, but you realize the effect of the power of voice. Even if you believe in that, just don’t come out and say that stuff — it’s for intimate conversations because perception while you’re received changes. I’m actually a smart-ass individual … At the time, I just didn’t realize the effect … I’m sorry about all that.” (via)

Kyrie Irving has previously addressed his flat earth comments on Jimmy Kimmel Live but until now he’s stopped short of outright apologizing for spreading lies and convincing his fans that the earth is flat, which it most certainly is not.

In Kyrie’s own words, it was Instagram that led him down the rabbit hole of thinking the earth is flat. That’s where the seed of conspiracy theories was planted. After that, he took the red pill (or was it the blue pill?) and he became the laughing stock of the sports community for claiming the earth is flat.

The NHL kicks off its 2018/2019 season this week and the NBA begins on October 16th. We’re finally past that late-Summer void where there are no good sports worth watching now that NCAAF and the NFL are back. Life is good.