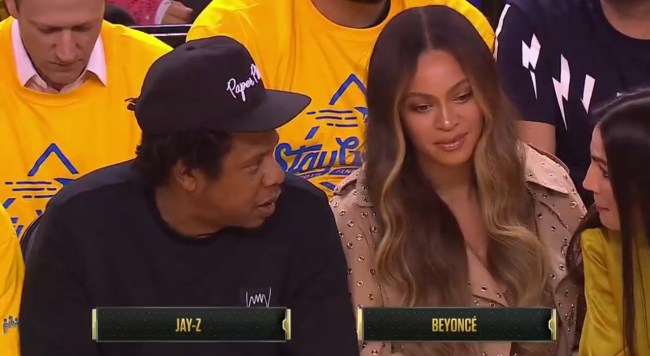 God. I love the NBA. Not so much for the action on the court. It’s okay, I guess. I am talking about all the action off the court.

The League is hands-down one of the greatest reality shows on the planet. So. Much. Drama.

We couldn’t even get through an NBA Finals game without some of that off-court drama overshadowing the play of some of the greatest basketball players on the planet thanks to a moment involving Jay Z, Beyonce and the wife of the Golden State Warriors owner, Nicole Curran.

In case you somehow missed it, here you go.

Have to love the not-so-subtle move there at the end by Beyonce, re-establishing her personal space with Curran.

Curran, apparently feeling the terrorizing wrath of the Beyhive, later posted a photo of herself and Beyonce at the game with the caption, “We should all help and support each other.”

Wisely, she has the comments turned off, and while the caption is a nice thought, perhaps Curran would have been better off posting this photo from a different NBA game back in 2014 involving Beyonce and Jay Z.

Not sure I’ve loved a pic more than "Jay-Z Is Intensely Disinterested In Beyonce And Jake Gyllenhaal’s Conversation" pic.twitter.com/QZG1ZoJQJ6

Then again, maybe Curran isn’t quite as passive-aggressive as some people. (Swipe right and notice the tight cropping of the photo and video.)