Lavar Ball Claims Magic Johnson, Rob Pelinka Reneged On Promise To Give LiAngelo A Chance With The Lakers 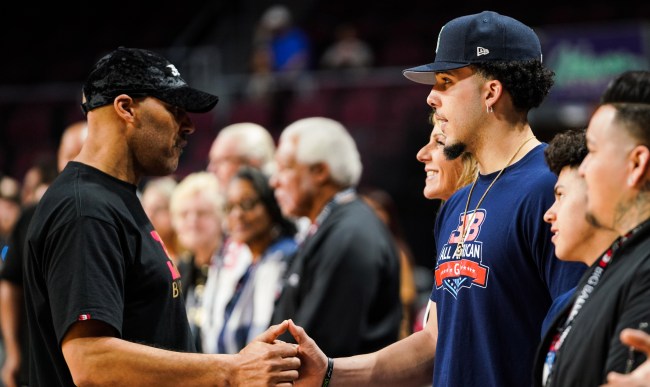 What is LaVar Ball going to do when Lonzo inevitably gets traded to a team like the Pelicans or the Hawks?

How will he ever cope with his kid playing in a small market making all of the nonsense he spouts on the regular all but irrelevant?

For example, LaVar is still under the delusion that at some point all three of his sons, Lonzo, LiAngelo and LaMelo will be playing on the same NBA team.

I guess that’s the sort of thing you would believe when you also claim to think Zion Williamson can’t “hold a candle” to LiAngelo.

Speaking of delusions and LiAngelo Ball, LaVar now claims that former Lakers president Magic Johnson and current general manager Rob Pelinka promised to give LiAngelo a chance to play for the Lakers, but they never followed through.

Here’s what LaVar told Shannon Sharpe on Tuesday’s episode of Undisputed. (Transcript via For The Win)…

LaVar Ball: “Well if you say you’re going to do something and it doesn’t happen, that’s when I kind of lose faith in you. And sometimes, somebody above doesn’t allow you to do that, or you just do it on your own, but either way. One of the things, he said ‘we keep family together.’

…You’ve got to get ‘Gelo first. You’ve at least got to give him a chance to play with Lonzo. You should have at least got him in Summer League, anything. I thought they were going to take him as the last pick, at least. Saying ‘you got one more pick? Go ahead and get him.’ But why wouldn’t you do something to help Lonzo? Why wouldn’t you get his brother, who has the best chemistry with him? And he can play. They don’t even give him that opportunity, so that’s when I was just like ‘OK. Whatever you guys say, you’re not meaning nothing.’ Because you say ‘keep family together,’ and then you don’t even bring him in?”

LaVar Ball: “Yes. Him and Rob. Behind closed doors, we did talking, and just like grown men, we don’t have to put it all out there. But hey, I ain’t saying put my boy on the team or nothing like that. Let him play with Lonzo and see how he do. If he does raggedy, then you’ll be like ‘ah, I don’t think it’ll work.’ But let him and Lonzo do their thing together.”

.@ShannonSharpe: Magic led you to believe that he would at least give Gelo an opportunity?@Lavarbigballer: Yes, Magic and Rob Pelinka behind closed doors. pic.twitter.com/IwyXDj0kZN

LiAngelo, who went undrafted in the 2018 NBA draft, averaged a state-high 33.8 points per game in 2017 as a senior at Chino Hills High School in California, but has since played just one game for UCLA (he was suspended for shoplifting on a team trip to China), played professionally with BC Prienai of the Lithuanian Basketball League, and with the Los Angeles Ballers of the Junior Basketball Association (a league founded by LaVar) where he averaged 50.4 points per game in seven contests.