Is LeBron To Blame For The Lakers Team Bus Leaving Without Luke Walton Following A Loss? 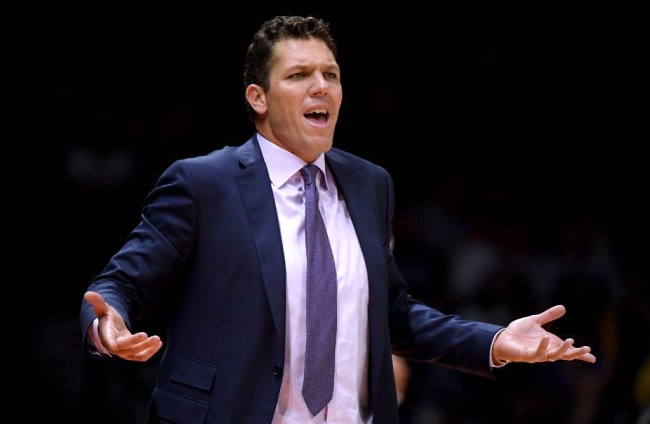 Dave Cowens isn’t exactly a household name but he does have a claim to fame as the last person to simultaneously play on and coach an NBA team at the same time during a fairly disastrous run with the Celtics in the late 1970s.

There’s nothing I’d love more than to see the player-coach make a comeback, and while its technically a thing of the past, some people are doing what they can to carry on the legacy.

After a season’s worth of hype, LeBron James finally announced he’d be taking his talents to Venice Beach when he decided to sign a deal with the Lakers this offseason and there’s a very good chance he ends up finishing his career in Los Angeles.

Unfortunately, things haven’t exactly gone as planned on the West Coast and the Lakers are currently sitting a game below .500. As of right now, there’s a very real chance they don’t make the playoffs this year if things continue at the pace they have.

While you can’t blame any single person for the team’s struggles, Luke Walton is an easy target. The coach started off the year on the hot seat, and while Magic Johnson claims his job is safe until the end of the season, several reports—including one that claims James has been ignoring his play calls—indicate he’s struggling to maintain control.

After dropping yet another game to the Pelicans over the weekend in New Orleans, the team boarded the bus and left the arena and were presumably halfway to the hotel before someone channeled Kevin’s mom in Home Alone and yelled “LUKE!” after realizing the coach had been left behind.

So this was interesting. I was talking to some SKC staffers I know as the Lakers’ team bus is pulling off. Suddenly, Luke Walton comes around the corner. Bus gone. It had to come back for the coach. Damn shame. pic.twitter.com/uy0HX7XYIS

As of right now, there’s no evidence that LeBron was the person who told the driver to leave but I’m going to assume that’s the case until I’m presented with evidence that would suggest otherwise.

According to Kurt Helin, Walton was allegedly on a later bus, which sounds exactly like something LeBron would tell Kurt Helin to say in this situation.

Contrary to an early story now removed from the NBC's site, Luke Walton did not miss the Lakers bus back to the hotel last night. He was on a later bus.

We apologize for the mistake.